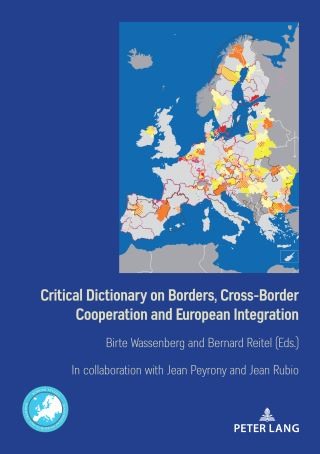 This Critical Dictionary on Borders, Cross-Border Cooperation and European Integration is the first encyclopaedia which combines two so far not well interconnected interdisciplinary research fields, i.e. Border Studies and European Studies. Organised in an alphabetical order, it contains 207 articles written by 115 authors from different countries and scientific disciplines which are accompanied by 58 maps. The articles deal with theory, terminology, concepts, actors, themes and spaces of neighbourhood relations at European borders and in borderlands of and around the European Union (EU). Taking into account a multi-scale perspective from the local to the global, the Critical Dictionary follows a combined historical-geographical approach and is co-directed by Birte Wassenberg and Bernard Reitel, with a large contribution of Jean Peyrony and Jean Rubio from the Mission opérationnelle transfrontalère (MOT), especially for the cartography. The Dictionary is also part of four Jean Monnet activities supported by the Erasmus+ programme of the European Union for the period 2016-2022: two Jean Monnet projects on EU border regions (University Strasbourg), one Jean Monnet network (Frontem) and the Franco-German Jean Monnet excellence Center in Strasbourg, as well as the Jean Monnet Chair of Bernard Reitel on borders and European integration. Rather than being designed as an objective compilation of facts and figures, it should serve as a critical tool for discussion between researchers, students and practitioners working in the field of borders, cross-border cooperation and European Integration.