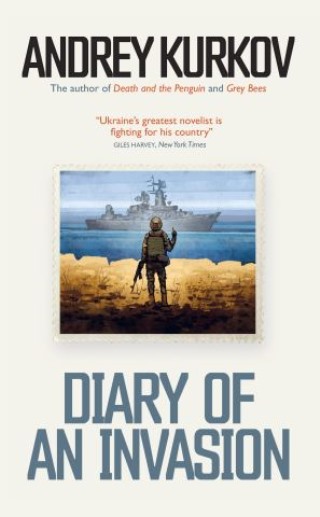 Diary of an Invasion

The Russian Invasion of Ukraine

This journal of the invasion, a collection of Andrey Kurkov's writings and broadcasts from Kyiv, is a remarkable record of a brilliant writer at the forefront of a 21st-century war.

Andrey Kurkov has been a consistent satirical commentator on his adopted country of Ukraine. His most recent work, Grey Bees, is a dark foreshadowing of the devastation in the eastern part of Ukraine in which only two villagers remain in a village bombed to smithereens. The author has lived in Kyiv and in the remote countryside of Ukraine throughout the Russian invasion. He has also been able to fly to European capitals where he has been working to raise money for charities and to address crowded halls. Kurkov has been asked to write for every English newspaper, as also to be interviewed all over Europe. He has become an important voice for his people.

Kurkov sees every video and every posted message, and he spends the sleepless nights of continuous bombardment of his city delivering the truth about this invasion to the world.

Andrey Kurkov: Born near Leningrad in 1961, Andrey Kurkov was a journalist, prison warder, cameraman and screenplay-writer before he became well known as a novelist. He was a pioneer of self-publishing, selling more than 75,000 copies of his books in a single year. His novel Death and the Penguin, his first in English translation, became an international bestseller, translated into more than thirty languages. He is also known as a commentator and journalist on Ukraine for the international media. His work of reportage, Ukraine Diaries: Dispatches from Kiev, was published in 2014.