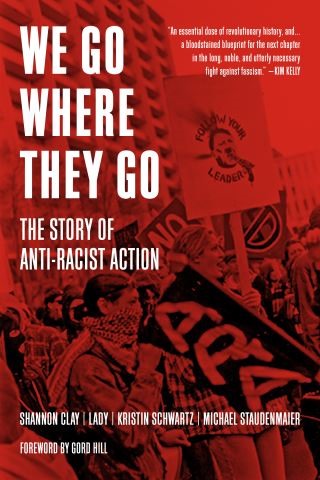 We Go Where They Go

The Story of Anti-Racist Action

What does it mean to risk all for your beliefs? How do you fight an enemy in your midst? We Go Where They Go recounts the thrilling story of a massive forgotten youth movement that set the stage for today's anti-fascist organizing in North America. When skinheads and punks in the late 1980s found their communities invaded by white supremacists and neo-nazis, they fought back. Influenced by anarchism, feminism, Black liberation, and Indigenous sovereignty, they created Anti-Racist Action. At ARA’s height in the 1990s, thousands of dedicated activists in hundreds of chapters joined the fights—political and sometimes physical—against nazis, the Ku Klux Klan, anti-abortion fundamentalists, and racist police. Before media pundits, cynical politicians, and your uncle discovered “antifa,” Anti-Racist Action was bringing it to the streets.

Based on extensive interviews with dozens of ARA participants, We Go Where They Go tells ARA’s story from within, giving voice to those who risked their safety in their own defense and in solidarity with others. In reproducing the posters, zines, propaganda and photos of the movement itself, this essential work of radical history illustrates how cultural scenes can become powerful forces for change. Here at last is the story of an organic yet highly organized movement, exploring both its triumphs and failures, and offering valuable lessons for today’s generation of activists and rabble-rousers. We Go Where They Go is a page-turning history of grassroots anti-racism. More than just inspiration, it's a roadmap.

Kristin Schwartz grew up with the Toronto chapter of ARA from 1992 until 2003, and is grateful to have had that opportunity to contribute to the long struggle against white supremacy. She went on to work in community radio and has produced several audio documentaries including Women: the Oppressed Majority (2016); The Latin American Revolution (2014) and The Ravaging of Africa (2007); some were syndicated across the Pacifica Network. Her writing has been published in Our Times, Canadian Dimension, the Canadian Centre for Policy Alternatives Monitor and Labour/Le Travail.

Michael Staudenmaier is a veteran of many anti-fascist, anti-imperialist, and anarchist projects over the past quarter century, including work with ARA Chicago in the 1990s and 2000s. He is the author of Truth & Revolution: A History of the Sojourner Truth Organization, 1969–1986 (AK Press, 2012), as well as other many shorter works of political analysis and historical scholarship. He works as assistant professor of history at Manchester University in Indiana and lives in Chicago with his family.

Shannon Clay is a student, historian, and community activist from the Mountain West. Coming up after ARA had largely declined, he learned of its little-known history through anarchist networks and saw the need to document and publicize its history for a new generation of activists. He has been involved in student organizing and in prison solidarity and abolition work.

Lady is from Columbus, Ohio and proud to be a working class woman. She worked with ARA in the 1990s and 2000s, and was a member of the North Eastern Federation of Anarcho-Communists from 2001 until it ended in 2011. Lady is a founding member of Keystone ARA and contributes to One People's Project/Idavox. She has dabbled in various anti-fascist how to writings and community projects over the years. This is the first book she will take credit for. She lives with her family in Western Pennsylvania.