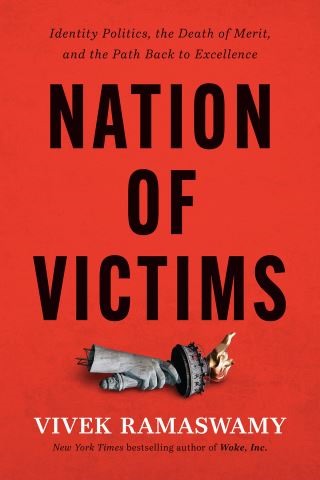 Identity Politics, the Death of Merit, and the Path Back to Excellence

The New York Times bestselling author of Woke Inc. makes the case that the essence of true American identity is to pursue excellence unapologetically and reject victimhood culture.

Hardship is now equated with victimhood. Outward displays of vulnerability in defeat are celebrated over winning unabashedly. The pursuit of excellence and exceptionalism are at the heart of American identity, and the disappearance of these ideals in our country leaves a deep moral and cultural vacuum in its wake.

But the solution isn’t to simply complain about it. It’s to revive a new cultural movement in America that puts excellence first again.

Leaders have called Ramaswamy “the most compelling conservative voice in the country” and “one of the towering intellects in America,” and this book reveals why: he spares neither left nor right in this scathing indictment of the victimhood culture at the heart of America’s national decline.

Following the success of his instant bestseller Woke Inc., Ramaswamy explains in his new book that we’re a nation of victims now. It’s one of the few things we still have left in common—across black victims, white victims, liberal victims, and conservative victims. Victims of each other, and ultimately, of ourselves.

This fearless, provocative book is for readers who dare to look in the mirror and question their most sacred assumptions about who we are and how we got here. Intricately tracing history from the fall of Rome to the rise of America, weaving Western philosophy with Eastern theology in ways that moved Jefferson and Adams centuries ago, this book describes the rise and the fall of the American experiment itself—and hopefully its reincarnation.

Vivek Ramaswamy is a New York Times bestselling author and an entrepreneur who has founded multiple successful enterprises. A first-generation American, he founded Roivant Sciences in 2014 and led the largest biotech IPOs of 2015 and 2016, eventually culminating in successful clinical trials in multiple disease areas that led to FDA approved products. He has founded other successful healthcare and technology companies, and in 2022, he launched Strive Asset Management, a new firm focused on restoring the voices of everyday citizens in the American economy by leading companies to focus on excellence over politics.

Mr. Ramaswamy was born and raised in southwest Ohio. He graduated summa cum laude in biology from Harvard in 2007 and began his career as a biotech investor at a prominent hedge fund. Mr. Ramaswamy continued to work as an investor while earning his law degree at Yale, where he was a recipient of the Paul and Daisy Soros Fellowship for New Americans. In 2020, he emerged as a prominent national commentator on stakeholder capitalism, free speech, and identity politics. He has authored numerous articles and op-eds which have appeared in The Wall Street Journal, The New York Times, Harvard Business Review, and Newsweek. He is the author of the bestselling Center Street book Woke, Inc.