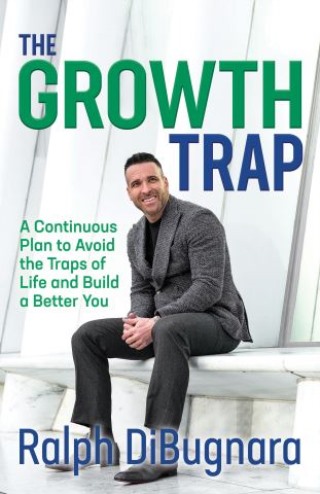 Growth is a natural part of life between the ages of birth and adulthood, as human beings typically get bigger, stronger, smarter, and more functional with age. This growth is unintentional and requires little to no effort—but at some point, that growth stops, and an individual’s progress is then limited to whether or not they are actively seeking future development.

The Growth Trap addresses a condition that Ralph DiBugnara has dealt with throughout his life—personally, professional, and directly with his brand. After seasons of stagnated growth, he’s learned the necessity of intentionally pursuing progress, rather than expecting goals to be accomplished without effort.

Ralph explains how many get caught in a growth trap when they deem progress and change to be too much of a challenge. These individuals like to talk, reminisce, and ultimately identify with their “past selves,” because it’s easier than facing who they are now. And while it’s better to pursue growth and work towards the accomplishment of one’s goal, that doesn’t mean that it’s possible to avoid all growth traps along the way.

Ralph DiBugnara’s The Growth Trap is an essential resource for those looking to achieve their goals and avoid pitfalls that will hinder their progress. He shares his personal experiences—as well as the strategies he learned along the way—so that readers can grow their brands and businesses while becoming true disruptors in every aspect of their lives.

Ralph DiBugnara is a successful serial entrepreneur and real estate expert. Growing up, he struggled financially, but he knew he wanted more for himself and his family. Ralph allow generational poverty to define his future; instead, he became an agent of generational change. Today, he holds the prestigious roles of President at Home Qualified, a digital resource for buyers and sellers, and Vice President at Cardinal Financial, a nationally recognized mortgage loan company. He is also nationally recognized as a mortgage banker and real estate expert.

Ralph’s expertise pushed him to start a series called The Real Estate Disruptors, where he interviews guests on investing, property guidance and advice. His program focuses on creating an elite network of industry leaders to help brokers succeed in the social media driven economy. He also launched a mentoring program for inner-city young adults called “The Generation Disruptor Scholarship Program," which was developed to educate students about getting into the real estate industry, breaking generational curses, and growing into leaders within their communities. Ralph plans to expand his connections with young adults through his scholarship program, so that they can start a new future for themselves.