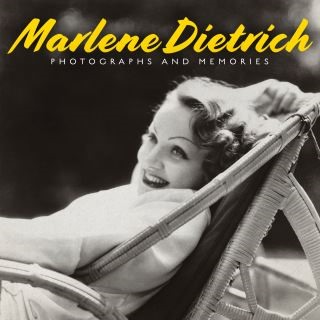 Marlene Dietrich never threw anything away. She kept her good-luck rag doll (it appeared with her in The Blue Angel and followed her to dressing tables on every movie set). She kept the letters she received from, friends, colleagues, lovers, and her husband of fifty-three years. She kept every article of clothing made for her by the great French couturiers and many from legendary Hollywood costume designers. She kept everything.

After Dietrich's death, all of the memorabilia were cataloged—25,000 objects and 18,000 images. Marlene Dietrich: Photographs and Memories brings together her treasures as depicted in 289 photographs from her own collection and features extended captions by her daughter and sole biographer, Maria Riva. We see Dietrich across the years and roles of her life: a child, a young actress in Berlin, a newlywed, a devoted American, a mother, and of course, a glamorous Hollywood legend.

An intimate look into the life of an unforgettable star, this collection offers fans more than just photos and memorabilia—it shares perspective from Marlene herself.

Marlene Dietrich: Marlene Dietrich (1901–1992) was a German American actress best known for her performances in The Blue Angel (1930), Shanghai Express (1932), I Love a Soldier (1936), Manpower (1941), and Witness for the Prosecution (1957). During World War II, Dietrich toured domestically to sell war bonds and, as soon as she was able, she became most well-known for her front-line efforts to support Allied troops. After the war, she received recognition both domestically and internationally for her efforts and was awarded the Ordre National de la Légion d'Honneur (France, 3 ranks), the Medal of Valor (Israel), and the Medal of Freedom (USA) among many others.