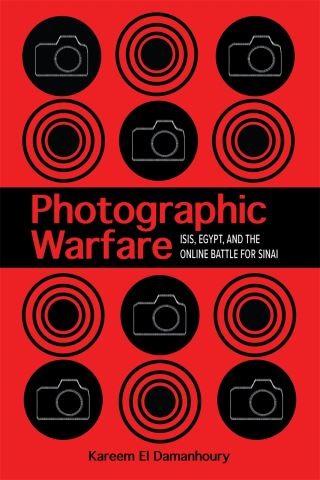 ISIS, Egypt, and the Online Battle for Sinai

Photographic Warfare explores the processes of visual contestation at work in the competing official media campaigns of state forces and militant, nonstate actors in the online environment. Islamist and far-right militant groups are increasingly weaponizing their visual media by displaying their actions—beheadings, trainings, fighting on the battlefield, services provision to locals, and so on— as spectacles that circulate around the globe to challenge statebased media messaging and policy agendas. In response, numerous states and coalitions have expanded their online media presence to counter such threats.

Using the conflict between ISIS and the Egyptian state over the Sinai Peninsula as a case study, Kareem El Damanhoury introduces an analytical framework of visual contestation to guide future studies of competing visual media campaigns in the online environment. The proposed model provides a rubric for dissecting and understanding contemporary photographic warfare using visual framing, semiotic analysis, contextual interpretations, and comparative applications. Photographic Warfare further emphasizes the many situational factors that influence visual output and content, including militant attacks, counterterrorism operations, loss of leaders, and introduction of new groups into the battlefield.

Kareem El Damanhoury: KAREEM EL DAMANHOURY is an assistant professor in the University of Denver's Department of Media, Film, and Journalism Studies and a faculty affiliate in the Center for Middle East Studies. Since 2017, he has been serving as a content producer at CNN International. He lives in Aurora, Colorado.