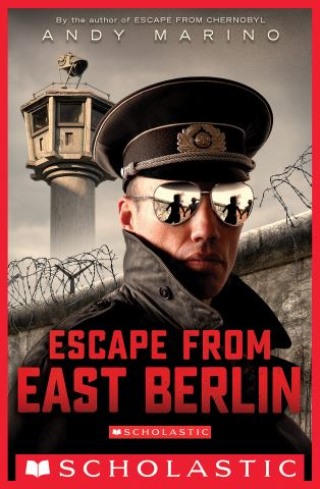 From the author of The Plot to Kill Hitler trilogy and Escape from Chernobyl comes another fast-paced, high-interest historical thriller, chronicling two daring attempts to cross the Berlin Wall, set decades apart.

December, 1961 - Marta is a young girl who saw thirty miles of barbed wire appear across her city overnight, separating Berlin into West and East — with Marta’s home on the Communist Bloc-controlled eastern side.

January, 1989 - Now a spray-painted concrete monolith, the Berlin Wall bisects the city. Kurt, a young East Berliner, often wonders what those living on the other side must think of their unseen neighbors. Do they hate the people of East Germany as completely as Kurt has been instructed to hate them?

Inspired by real events, Escape from East Berlin tells two stories of daring bids for freedom from the Eastern Bloc, set decades apart and relayed in alternating perspectives. Triumph and tragedy intertwine in this examination of both the earliest and final days of the Berlin Wall.

Andy Marino:
Andy Marino was born and raised in upstate New York. He spent his childhood orchestrating Lego pirate battles, drawing detailed maps of imaginary video games, and cheating death in Choose Your Own Adventure books. Profoundly influenced by the work of J.R.R. Tolkien, Andy started writing his first novel at the age of eleven. Tragically, THE RUNES OF ILLIARM was never completed. For books that were, visit Andy online at andy-marino.com.