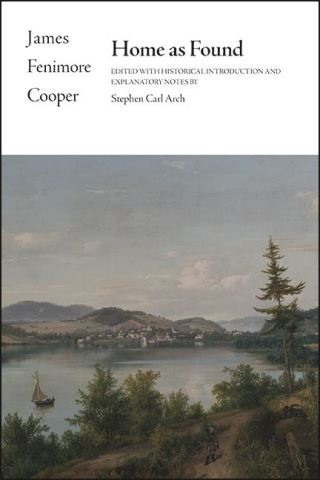 Within months of publishing Homeward Bound, James Fenimore Cooper continued that story in a second, stand-alone novel, Home as Found. One of the most important of his long career, Home as Found is a novel of manners in which Cooper satirized Wall Street speculation, jingoism, the penny press, and high society, writing boisterously and with a sharp but critical eye about a nation in transition. He revealed “follies and peculiarities” of the young nation, but did so with a hope that the advancing forces of democracy would not get turned aside by greed and insular nationalism. In drawing rooms, ballrooms, and Wall Street offices, Cooper sees clearly into the heart of the democratic experiment, dramatizing conflicts that we are still grappling with nearly two hundred years later. Stephen Carl Arch provides a historical introduction discussing Cooper’s composition of the novel and its politicized reception in journals and newspapers, along with detailed explanatory notes. This authoritative edition draws upon the first edition, a partial author’s manuscript, and a substantial (but not complete) amanuensis copy of the author’s manuscript; and provides a full scholarly apparatus discussing the editorial choices. It has been approved by the Committee on Scholarly Editions of the Modern Language Association.

The Writings of James Fenimore Cooper

James Fenimore Cooper: Stephen Carl Arch is Professor of English at Michigan State University. He is the editor of Homeward Bound Or, The Chase: A Tale of the Sea by James Fenimore Cooper and the author of several books, including After Franklin: The Emergence of Autobiography in Post-Revolutionary America, 1780–1830.