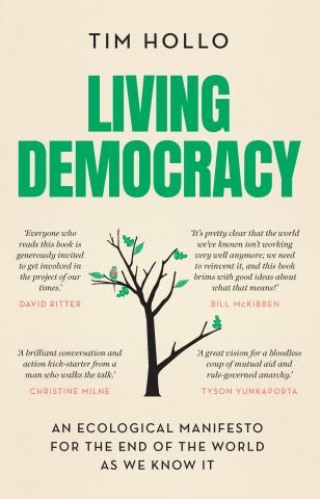 The way we glow when having a great conversation, building off each other' s ideas, finding solutions we can all be satisfied with. The way we spark together when marching and chanting in protest. This is living democracy.Yes, the world looks bleak. Across our society there' s a mounting sense of desperation in the face of the climate crisis, gaping economic inequality and racial injustice, increasing threat of war, and a post-truth politics divorced from reality. Extinction is in the air.But what if the solutions to our ecological, social and political crises could all be found in the same approach? What if it was possible for us to not just survive, but thrive?In Living Democracy, Greens activist Tim Hollo offers bold ideas and a positive vision. It' s the end of the world as we know it, but it doesn' t have to be the end of the world. In fact, around the globe, people and communities are beginning an exciting new journey.This book will inspire you, inform you, and get you fired up to co-create our common future. A living democracy.'Everyone who reads this book is generously invited to get involved in the project of our times.' &#8211; David Ritter'A brilliant conversation and action kick-starter from a man who walks the talk.'&#8211; Christine Milne'It' s pretty clear that the world we' ve known isn't working very well anymore; we need to reinvent it, and this book brims with good ideas about what that means!' &#8211; Bill McKibben'A great vision for a bloodless coup of mutual aid and rule-governed anarchy.' &#8211; Tyson Yunkaporta'A manual for making a new and better world that shows us, with lucidity, courage and compassion, that the tools for building that world are already in our hands.' &#8211; James Bradley'I have been waiting for this book, and now that Tim Hollo has written it, I' ll be putting it in the hands of pretty much everyone I know.' &#8211; Danielle Celermajer'Timely, vivid and urgent, this is a book that meets the challenges of our age head-on.' &#8211; Scott Ludlam'A brilliant treatise for our future and based on a deep understanding of First Nations knowledge &#8211; Tim Hollo has given us so much with this beautifully written work.' &#8211; Tjanara Goreng Goreng

Tim Hollo: Tim Hollo is Executive Director of the Green Institute and a visiting fellow at the ANU's RegNet. He is the founder of Green Music Australia, was previously Communications Director for Greens Leader Christine Milne, has been a board member and campaigner at Greenpeace Australia Pacific, and has recorded 7 albums and toured nationally and globally with FourPlay String Quartet. Living in Canberra with his partner and two kids, Tim established the city's flourishing Buy Nothing Groups, set up a little library, and spearheaded a campaign to keep billboard advertising out of Canberra. He has run fo