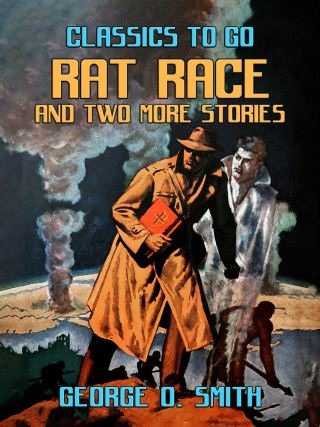 Excerpt: ""You're nuts," came the reply, but the voice on the telephone was jovially reproving rather than sarcastic. "I can't do anything about this order. Peter Manton blinked. "But it has a Four-A-One priority." Brannon nodded—invisibly, of course—and said, "Sure you have a top priority. Anything your lab wants has top. But darn it, Peter, the best priority in the world isn't going to buy you a dozen mousetraps that are nonexistent." "But—" "Besides which, that building you're in is about as rat-proof as a sealed gasoline can. There isn't an item of comestible in the place." "I know that. And the mice can go hungry for all I care. But the mice don't seem to understand that bringing food into the place is not only forbidden by law but dangerous." "But there ain't a mousetrap in the country. Ding bust it, Peter, mousetraps take spring wire, and labor. The people who used to make mousetraps are now making bombsights and tanks. Besides, Peter, over at that laboratory of yours there should be enough brains and gear to really build the Better Mousetrap. If you can spot a plane at fifty miles, split atoms, and fire radio equipment out of a cannon, you ought to be able to dispose of a mouse or two." Peter grinned. "You mean spot 'em with radar, and then shoot 'em down in flames with proximity fuses loaded with plutonium war heads? That might be a little strenuous, don't you think? Like cutting the throat to stop the spread of impetigo." "Well, if you have mice over there, you think of something. But top priority or not, we can't get you your mousetraps!" Peter hung up unhappily. He turned from his desk to see an impertinent mouse sitting on the floor watching him out of beady black eyes. Peter hurled a book at it and swore, a rare thing for him. The mouse disappeared behind a bank of filing cabinets."

George O. Smith: George Oliver Smith (April 9, 1911 – May 27, 1981) (also known by the pseudonym Wesley Long) was an American science fiction author. He is not to be confused with George H. Smith, another American science fiction author. Smith was an active contributor to Astounding Science Fiction during the Golden Age of Science Fiction in the 1940s.