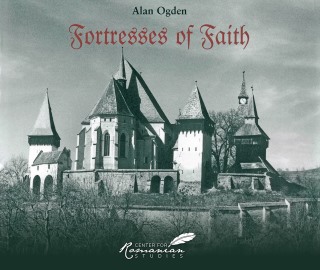 A Pictorial History of the Fortified Saxon Churches of Romania

For nearly a thousand years, the Saxon settlers from the Rhine valley played a vital role in the history of Transylvania until their diaspora in the second half of the twentieth century. Fortresses of Faith focuses on their magnificent architectural legacy — the fortress-churches or kirchenburgen of the Seibenburgen. After a comprehensive introduction covering history, architecture, and decor, the author takes us on an enthralling photographic tour, helpfully arranged for travelers into the areas surrounding Sibiu, Media?, Sighi?oara, and Bra?ov.Alan Ogden's black and white photographs poignantly capture the moody images of these “stone war-horses of Christendom,” many of which are now without congregations and prey to the dilapidation of time. It is a superb photographic record with a broad appeal to overseas descendants of Transylvanian Saxons, tourists, and students of Romanian history.Alan Ogden's other books include Revelations of Byzantium and Romania Revisited.

Alan Ogden: After a career as an international public relations executive, Alan Ogden turned his passion for travel and photography into photographing and writing about some of the places dearest to him. His books include Romania Revisited: On the Trail of English Travellers, 1602-1941, Revelations of Byzantium: The Monasteries and Painted Churches of Northern Moldavia, and Fortresses of Faith: A Pictorial History of the Fortified Saxon Churches of Romania, among others. He was a founder member of Pro Patrimonio, an NGO whose main mission is the conservation, rescue and reactivation of the cultural heritage of Romania, especially in architecture, and also of the Patrick Leigh Fermor Society, which published the quarterly The Philhellene. He lives in London, England.