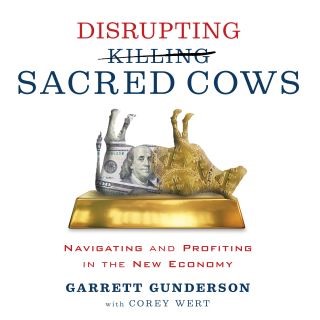 Navigating and Profiting in the New Economy

During the 2008 financial crisis, wealth strategist Garrett Gunderson made his timely debut into the literary world with his ground breaking book, Killing Sacred Cows, where he exposed the ingrained fallacies and destructive myths surrounding money and wealth. This New York Times Bestseller provided a fresh and thoughtful approach to debunking many of our archaic beliefs and misguided traditions within the world of personal finance at a time when our trust and comfort in the status quo had been severely fractured.

Now – 13 years later - on the heels of both a global pandemic and technological revolution, he returns with his highly anticipated follow-up, Disrupting Sacred Cows

Disruptive events have the power to alter even the most basic assumptions we have about our lives and profoundly change the way we live them. To many, such dramatic and sudden shifts can create chaos, confusion, and fear. However, Garrett asserts that disruption – while sometimes painful in its abruptness – can also be a time rife with opportunity for incredible growth and transformation by allowing it to shake us out of what he calls a “losing game”.When disruption happens, we create a space to play a new game, a “winning game”, one that can create more wealth, deepen relationships, increase contribution to society, and make life more fulfilling.

In his thought-provoking book, Garrett reveals:

Garrett Gunderson: Garrett Gunderson is called a "financial genius" in entrepreneurial circles, but he wasn't born with a silver spoon. In fact, Garrett's blue-collar roots are what make him so passionate about helping entrepreneurs build Economic Independence. Garrett comes from a 4th generation coal mining family, raised in rural Utah. His company, Wealth Factory, helps people with first generation businesses and entrepreneurs who understand hard work -- but who haven't been given the proper financial tools to build lasting wealth. He believes your legacy is defined not just by money, but by the values and contribution you pass along. It is something you both live and leave. Garrett lives in Salt Lake City, Utah.