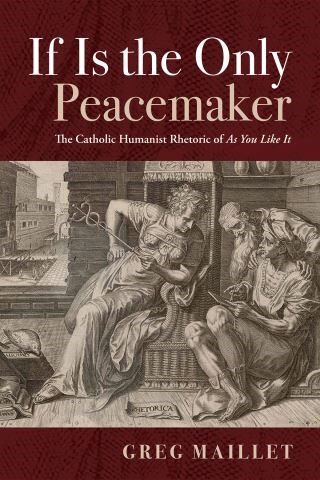 If Is the Only Peacemaker

The Catholic Humanist Rhetoric of As You Like It

If Is the Only Peacemaker explores the drama of Shakespeare through a cultural lens that can be shown to be central to the formation of this theatrical art: fourteenth- to sixteenth-century Catholic Humanism. Part I of this book traces this tradition through key figures in Medieval and Renaissance Humanism, including Dante, Chaucer, Erasmus, and Thomas More. The latter two, especially, convey Catholic Humanism to Shakespeare's England, and help to establish a rhetorical ideal: the union of eloquentia and sapientia, of wit and wisdom. Part II then closely reads one of Shakespeare's major comedies, As You Like It, through this ideal, finding in this play an outstanding example of the Catholic Humanist rhetoric central to Shakespeare's art. This part of the book also mingles rhetorical and performance criticism, citing six different productions of As You Like It.

Greg Maillet: Greg Maillet is Professor of English at Crandall University in Moncton, New Brunswick, Canada. He is co-author, with David Lyle Jeffrey, of Christianity and Literature: Philosophical Foundations and Critical Practice (2011). His recent books are Learning to See the Theological Vision of Shakespeare’s King Lear (2016), Reading Othello as Catholic Tragedy (2018), and Word Awake: An Introduction to the Novels of Michael D. O’Brien (2019).