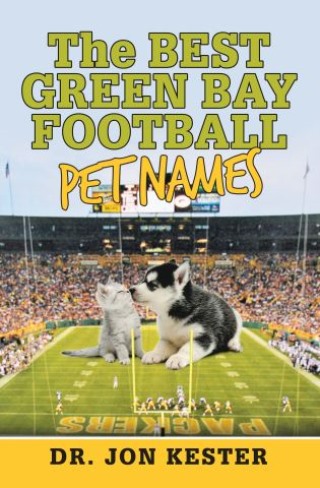 In Wisconsin not only are you born a Green Bay packer fan but your pets must also represent the greatest football team ever. All good pets need a name that represents the green and gold. This book will give you loads of ideas of what to name your new fur baby. The author leaves no stone unturned to find your new pet the perfect Packer name. In fact, Dr. Kester looked at every player from the very first team in 1919, through the Lombardi years and the dark years of the 1970s and 1980s then the return to glory years under Brett Favre, up to the present with Aaron Rodgers. These names may be from Hall of Fame players like Don Hutson or may come from names that just have a nice ring to them like Desmond Bishop.

Dr. Jon Kester: Dr. Jon Kester was born in Wisconsin Rapids in 1979, though not growing up with a pet named after any Packers he right out of the whom was a fan of all sports in the Great State of Wisconsin. This included at the time a not so great Green Bay Packers teams of the 1980s. Dr. Kester recalls as a boy being made fun of for wearing a Packer jacket on the school bus. Lucky for Jon Kester the 80s ended sooner than later and soon the whole bus was wearing Packer clothing. During the 1990s Dr. Kester started a his now massive collection of Green Bay Packer memorabilia. Which includes rare one of a kind items like, a Curley Lambeau autographed photo ,a Bart Starr gamed used full uniform and the neon sign from Donald Driver’s TV show. As an adult, Kester formed a great love and aspiration for the Packers amazing history and did everything he could to learn about the players and coaches that made the team great. After getting a master’s degree in sports administration Dr. Kester had only one place he wanted to work and that was Lambeau Field, he was lucky to get hired in 2008. During his 18 plus years of living and working in Green Bay, Jon has met many people who had pets named after Packer players. In fact a neighbor’s whose dog is named after Packer legend Ray Nitschke is what inspired him to write this book. Kester is constantly working on his next great book about the PACKERS so more will be coming soon!