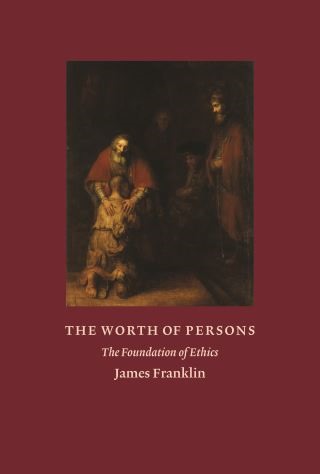 The Worth of Persons

The Foundation of Ethics

The death of a person is a tragedy while the explosion of a lifeless galaxy is a mere firework. The moral difference is grounded in the nature of humans: humans have intrinsic worth, a worth that makes their fate really matter. This is the worth that the Australian philosopher James Franklin proposes as the foundation of ethics. In The Worth of Persons he explains that ethics in the usual sense of right and wrong actions, rights and virtues, and how to live a good life, is founded on something more basic that is not itself about actions, namely the worth of persons. Human moral worth arises from certain properties that distinguish humans from the rest of creation (though some animals share a lesser degree of those properties): rationality, consciousness, the ability to act for reasons, emotional structure and love, individuality. This complex package makes humans the "piece of work" of which Hamlet says, “How noble in reason, how infinite in faculty."

In clear prose and deeply informed philosophical argument, The Worth of Persons establishes a foundation for ethics in the equal worth of persons, which makes ethics absolutely objective and immune to relativist attacks because it is based on the metaphysical truth about humans.

The Worth of Persons will appeal to all those who feel that endless debate about ethical dilemmas, rules, and principles fails to connect with what is really important ethically, that is, what makes humans matter.

James Franklin is the author of The Science of Conjecture: Evidence and Probability Before Pascal; Corrupting the Youth: A History of Philosophy in Australia; What Science Knows: And How It Knows It; and An Aristotelian Realist Philosophy of Mathematics. He is honorary professor at the University of New South Wales, Sydney, Australia, where he taught mathematics for nearly forty years and set up the world's first course on professional issues and ethics in mathematics. He is the editor of the Journal of the Australian Catholic Historical Society. He was awarded the 2005 Eureka Prize for Research in Ethics for work on the parallels between objectivity in mathematics and in ethics.