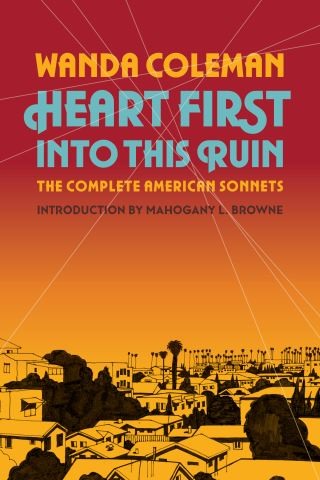 Heart First into this Ruin

The first complete collection of Wanda Coleman’s original and inventive sonnets. Long regarded as among her finest work, these one hundred poems give voice to loving passions, social outrage, and hard-earned wisdom.

Wanda Coleman was a beat-up, broke Black woman who wrote with anger, humor, and ruthless intelligence: “to know, i must survive myself,” she wrote in “American Sonnet 7.” A poet of the people, she created the experimental “American Sonnet” form and published them between 1986 and 2001. The form inspired countless others, from Terrance Hayes to Billy Collins.

Drawn from life’s particulars, Coleman’s art is timeless and universal. In “American Sonnet 61” she writes:

reaching down into my griot bag
of womanish wisdom and wily
social commentary, i come up with bricks
with which to either reconstruct
the past or deconstruct a head....
from the infinite alphabet of afroblues
intertwinings, i cull apocalyptic visions
(the details and lovers entirely real)
and articulate my voyage beyond that
point where self disappears

These one hundred sonnets—borne from influences as diverse as Huey P. Newton and Herman Melville, Amiri Baraka and Robert Duncan—tell Coleman’s own tale, as well as the story of Black and white America. From “American Sonnet 2”:

This is a collection of electrifying truth that only an artist such as Wanda Coleman can deliver.

Wanda Coleman—poet, storyteller and journalist—was born and raised in South Central Los Angeles. Coleman was awarded the prestigious 1999 Lenore Marshall Poetry Prize for Bathwater Wine from the American Academy of Poets, becoming the first African-American woman to ever win the prize, and Mercurochrome was a bronze-medal finalist for the 2001 National Book Award for Poetry. Wicked Enchantment: Selected Poems was the first new collection of her work since her death in 2013.