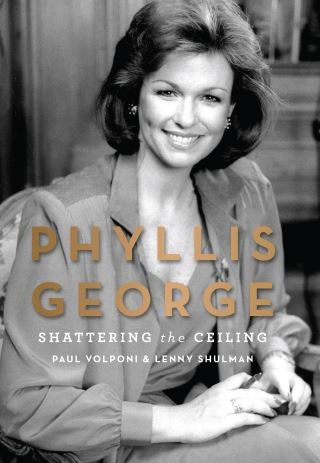 In 2019, the NFL issued a list of football's one hundred greatest game-changers, and among the legendary athletes and coaches was one broadcaster: Phyllis George. The first female anchor of a major network sports show, George broke the glass ceiling in sports journalism and embodied the complexities of the women's movement of the 1970s.

As a young woman, George first hit the media radar in 1971 when she won the crown of Miss America and toured the world. While many in the budding feminist movement looked down on the pageant queen, George parlayed her success into a television career and excelled in sports journalism. While she was not immune to criticism, George was never deterred by it, and constantly showed her inner strength and perseverance. Through the decades she cultivated a reputation as one of the most respected and strong-willed players in the rough and tumble businesses of sports and network news, breaking through the glass ceiling in one of the most male-driven industries in the world. She was a pioneer who helped pave the way for a new generation of female broadcasters. A published author and champion of the arts, George remained a stalwart advocate for female empowerment until her death in 2020.

In Phyllis George: Shattering the Ceiling authors Lenny Shulman and Paul Volponi trace George's evolution from Miss America to professional broadcaster, to arts advocate, author, philanthropist, and also as First Lady of Kentucky who was instrumental in getting her husband, John Y. Brown Jr., elected Governor of that state. George's life was defined by her professionalism, her strength of character, and her uncanny ability to leave an indelible impression on all she met.

Paul Volponi: Paul Volponi is an author, journalist, and educator. He is the author of numerous books, most recently Streetball Is Life: Lessons Earned on the Asphalt.|||Lenny Shulman is an Emmy Award-winning writer in TV and film as well as for magazines and newspapers. He has served as features editor for BloodHorse magazine and is the author of Justify: 111 Days to Triple Crown Glory and Ride of Their Lives: The Triumphs and Turmoil of Today's Top Jockeys. He lives in Versailles, Kentucky.