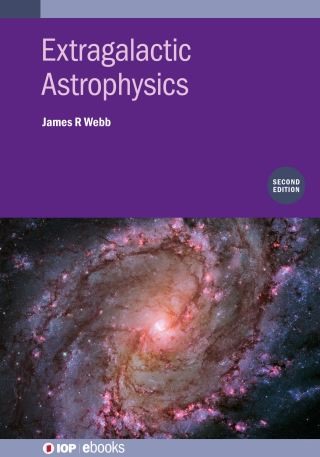 This book is designed to be an advanced undergraduate or graduate level text book on Extragalactic astrophysics. It is specifically designed for programs that do not have separate classes in cosmology and galactic structure. The book contains mathematical rigor including some general relativity and covers most topics in galactic structure, galaxy evolution, and cosmology. Created using lecture notes gathered by the author over 15 years of teaching astrophysics, this book has been refined and updated as new discoveries have been made, and as theories have gained traction.

The second edition contains over 50 pages of new and updated material, and questions have been added to the end of each chapter. Coverage of new discoveries such as neutrinos detected from a blazar and new gravitational wave detections has been added, and the sections on cosmology have been expanded.

Dr James R Webb is currently a full professor of physics and Director of the Stocker Astroscience Center at Florida International University (FIU). He received his bachelor’s degree in physics at Ball State University, and his masters and PhD in astronomy at the University of Florida. His research area is the study of blazar variability on all timescales and, although primarily an optical astronomer, he has worked in the UV, X-ray and gamma-ray spectral domains as well. He is an award-winning educator, earning teaching awards in 1994, 1996, 1999 and 2010, outreach and service awards in 2002 and 2009, and an ‘Astronomical Achievements Award’ from the Southern Cross Astronomical Society for his astronomy outreach programs. Dr Webb has over 140 publications in extragalactic Astrophysics, as well as hosting 2 international conferences. He has taught extragalactic astrophysics and general relativity at the graduate level for over 25 years.