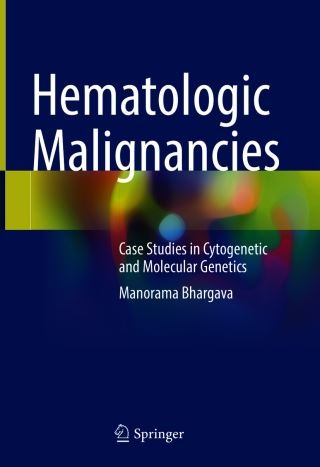 This book is a compendium of case studies in hematologic malignancies such as acute leukemias, myelodysplastic and myeloproliferative neoplasms, chronic leukemias and multiple myeloma covering cytogenetics (karyotyping Fluorescence in sitn hybridization (FISH)) and molecular studies in detail.  The first few chapters describe the methodology employed for karyotyping, FISH and Real Time PCR technology conducive to establishment of these labs if required. Each case study is described in detail by including the clinical history of the patient, findings of peripheral blood, bone marrow aspirate and bone biopsy morphological details. This is then followed by flowcytometric immunophenotyping, cytogenetic and molecular observations leading collectively to a final diagnosis, A discussion follows based on the relevance of this data in informing the prognosis, treatment response and survival in these patients. Additionally, this data serves as a key determinant for clinical decision making involving evidence based rational management of patients including targeted therapy. For better understanding, each case study is accompanied by black and white or colour images as appropriate. This book is a source of learning and a valuable read for clinical hematologists, hematopathologists, medical oncologists, residents, interns, DM Hematology students and DNB Hematology students as well.

Dr. Bhargava has served as a Professor and Head, Department of Hematology at the prestigious All India Institute of Medical Sciences until September 2001, Sir Ganga Ram Hospital till 2016 and as Senior Advisor and Head Hematopathology at Medanta, The Medicity until May 2020.

Dr. Bhargava is a pioneer in Hematology in India and is widely recognised for her contributions to Hematology both nationally and internationally.  In a career spanning almost 50 years, she advocated and brought awareness for hematology as a discipline separate from Internal Medicine and Pathology where it constituted a minor part.  Recipient of prestigious fellowships such as Alexander Von Humboldt, Fogarty and INSA fellowships. She has been principal investigator on several research grants, notably Indo-US, Indo-French, Indo–German and Indo-Japan grants and has published more than 300 articles in national and international journals.

In recognition of her contributions to Hematology, she was awarded the Dr. B.C. Roy National Award and the highest award of Indian Council of Medical Research, the Basanti Devi Amirchand prize. An acclaimed teacher, she established the first  ever superspecialty degrees of DM in clinical Hematology and DM in Hematapathology in the year 2000 at the All India Institute of Medical Sciences and the Diplomate National Board in Hematology in 2008.