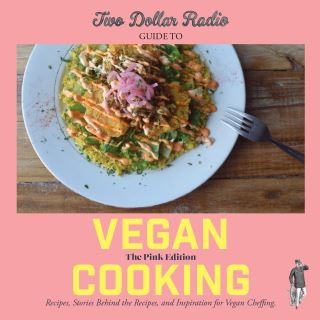 Two Dollar Radio Guide to Vegan Cooking: The Pink Edition (2022) is two things at once: a practical guide to vegan cheffing, and a playful epic of the stories behind the recipes.

In this Pink Edition of the celebrated Guide to Vegan Cooking series, the saga continues as executive chefs Jean-Claude van Randy and Speed Dog (with assists from Eric Obenauf) share comfort food recipes with an international flourish, such as Bunny Chow—a blasphemous bread bowl favored by South African surfers; Chilaquiles—a Mexican breakfast dish, and finally something the rockeros and the metaleros can agree on; and a Banana Peel Banh Mi—a riff on the classic Vietnamese sandwich using—you guessed it, banana peels! Rest assured, Chef Randy’s Sheboygan roots run deep, as there is a dedicated section on vegan “Cheezes,” as well as debaucherous Midwestern staples like Pimento Cheeze, French Toast Sandwiches, and Pizza. Vegan Hunger Demons do not sleep. Thankfully Randy and Speed Dog are laced up and ready for battle.

This Guide to Vegan Cooking is for you if:
• You’re looking for satisfying comfort food;
• You’re interested in a vegan diet but are having trouble giving up cheese;
• You’re searching for accessible vegan recipes that don’t require hard-to-find ingredients you can’t pronounce;
• You crave ADVENTURE.

Speed Dog: Speed Dog's the drummer in the band, he keeps the beat. With Randy, he operated the popularly celebrated VEGAN FXXD truck, which slayed hunger demons at events from the Gathering of the Juggalos to the Rodeo Festival in Sheridan, Wyoming. Since 2020, Speed Dog has been a food columnist for the Mid-Ohio Weekly Gazette.|||Jean-Claude van Randy has two embossed certificates that you can't touch above his mahogany desk in his executive chef's office at Two Dollar Radio Headquarters in Columbus, Ohio, and prefers you refer to his hair decisions as a Kentucky waterfall, not a mullet — Jean-Claude van Damme never had to answer these questions.|||

Eric Obenauf, creator of the Two Dollar Radio Guide to Vegan Cooking series, is the Editorial Director of acclaimed indie press Two Dollar Radio, which he founded with his wife, Eliza, in 2005. Eric was included in Publishers Weekly’s “50 Under 40” list, spotlighting 50 individuals working in publishing under age 40 worth watching, and was one of five finalists in the magazine’s 2016 “Star Watch” awards. At Two Dollar Radio Headquarters — an indie bookstore, vegan cafe, bar, and performance space opened in 2017 in Columbus, Ohio — Eric stocks the books and chefs it up in the kitchen. He enjoys camping, hiking, cooking, reading outside with a beer or two like a gentleman, and dad jokes.