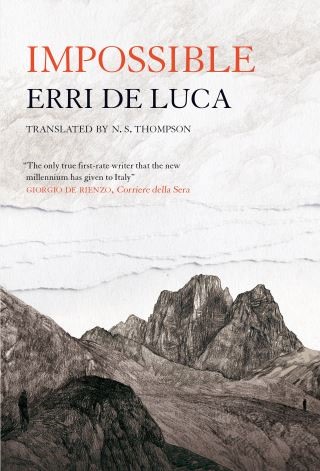 'Mine is an experimental case. It's pushing a man to confess to a political crime, the last instalment of a forgotten era.'

In this taut novella set in the Dolomites, a cat-and-mouse interview opens between a young magistrate and an older suspect. It becomes an examination of perception versus truth and of the group protection afforded in a moment of collective action versus the echoing responsibility of the individual over 'the leprosy of time'.

Without evidence, an experienced hiker is held in solitary confinement under suspicion of murdering a man who fell to his death on a mountain path. In a series of tense, metered interviews, the political causes of the suspect's past emerge. The men knew each other decades earlier, were brothers-in-arms against a greater social injustice until the victim turned state’s evidence and the accused was sent to prison. Climb the mountain yourself, the old man urges the young magistrate. Not for confirmation, but to find out the truth. His past guilt and the suspense surrounding his guilt now become corollaries to De Luca's central drama of discovery: the real character of a man and his integrity in the impossibility of the moment.

Erri De Luca: Erri De Luca is an award-winning writer, poet and activist whose literary awards include the Prix André Malraux, the European Book Prize and the European Prize for Literature. The author of more than seventy books translated into more than thirty languages, he has been called 'the writer of the decade' by Corriere della Sera. A dedicated mountain climber, he lives a reclusive life in the hills surrounding Rome.