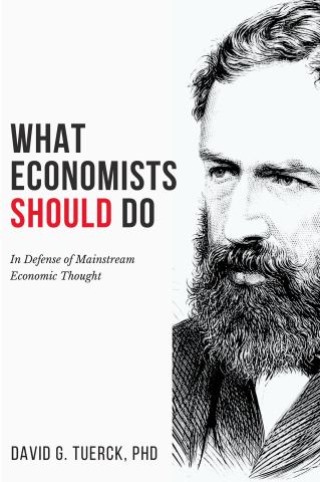 What Economists Should Do

In Defense of Mainstream Economic Thought

There is controversy among economists over just what it is that economists should do.

The controversy is centered on the question whether what is called “neoclassical” or “mainstream” economics provides the appropriate template for performing economic analysis. Neoclassical economics is based on the principle that economic behavior is guided by “rational choice,” i.e., choice based on reason rather than sentiment.

Challenges to this principle come from several fields of study: behavioral economics, neuroeconomics, Austrian economics, Keynesian economics, and others. A common thread running through these fields is that the rational choice assumption is unrealistic and therefore not useful for analyzing economic policy choices.

It is important, however, to distinguish between economic policy choices, which are frequently irrational, and how individuals are observed to react to these choices. Examples of irrational policy choices are minimum wage laws, buy-American rules, and corporate tax increases. The job of the economist is to play a role akin to that of preachers, in exposing such choices for their irrationality. Mainstream economics shows that people react to these choices in a manner that impairs the performance of the economy.

David G. Tuerck: David G. Tuerck is President of the Beacon Hill Institute, a Massachusetts economic research organization that specializes in modeling tax law changes. He is also Professor Emeritus at Suffolk University in Boston, where he served on the Economics faculty for 38 years. He received his PhD in economics from the University of Virginia. Before joining Suffolk, he worked as a director in the economic consulting practice at Coopers & Lybrand in Washington DC. During his tenure at Coopers & Lybrand, he served as a consultant to the U.S. Treasury on modeling the Reagan tax policy proposals. He has published in the academic literature and testified before Congress and state legislatures on numerous occasions and on a number of public policy issues.