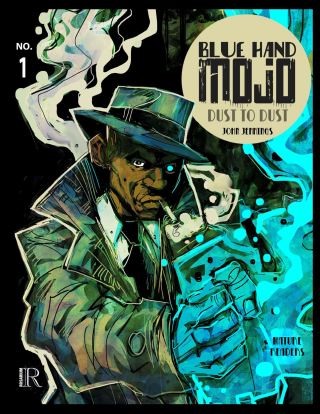 1931. Bronzeville. Chicago. The mage, Frank "Half Dead" Johnson, is a marked man. Literally. A drunken decision fueled by tragedy has left him with half a soul, sorcerous powers, and two centuries to work off his debt to Scratch (aka The Devil) himself. Half-Dead is visited by a demon from his past who wants him to take on a very dangerous demon today.

As Professor of Media and Cultural Studies at the University of California at Riverside (UCR), Jennings examines the visual culture of race in various media forms including film, illustrated fiction, and comics and graphic novels. He is also the director of Abrams ComicArts imprint Megascope, which publishes graphic novels focused on the experiences of people of color. His research interests include the visual culture of Hip Hop, Afrofuturism and politics, Visual Literacy, Horror, and the EthnoGothic, and Speculative Design and its applications to visual rhetoric.

Jennings is co-editor of the 2016 Eisner Award-winning collection The Blacker the Ink: Constructions of Black Identity in Comics and Sequential Art (Rutgers) and co-founder/organizer of The Schomburg Center’s Black Comic Book Festival in Harlem. He is co-founder and organizer of the MLK NorCal’s Black Comix Arts Festival in San Francisco and also SOL-CON: The Brown and Black Comix Expo at the Ohio State University.