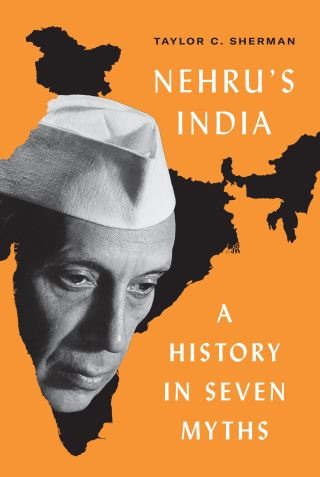 A History in Seven Myths

Nehru’s India brings a provocative but nuanced set of new interpretations to the history of early independent India. Drawing from her extensive research over the past two decades, Taylor Sherman reevaluates the role of Jawaharlal Nehru, India’s first prime minister, in shaping the nation. She argues that the notion of Nehru as the architect of independent India, as well as the ideas, policies, and institutions most strongly associated with his premiership—nonalignment, secularism, socialism, democracy, the strong state, and high modernism—have lost their explanatory power. They have become myths.

Sherman examines seminal projects from the time and also introduces readers to little-known personalities and fresh case studies, including India’s continued engagement with overseas Indians, the importance of Buddhism in secular India, the transformations in industry and social life brought about by bicycles, a riotous and ultimately doomed attempt to prohibit the consumption of alcohol in Bombay, the early history of election campaign finance, and the first state-sponsored art exhibitions. The author also shines a light on underappreciated individuals, such as Apa Pant, the charismatic diplomat who influenced foreign policy from Kenya to Tibet, and Urmila Eulie Chowdhury, the rebellious architect who helped oversee the building of Chandigarh.

Tracing and critiquing developments in this formative period in Indian history, Nehru’s India offers a fresh and definitive exploration of the nation’s early postcolonial era.

Taylor C. Sherman teaches in the Department of International History at the London School of Economics and Political Science. Her books include Muslim Belonging in Secular India and State Violence and Punishment in India.