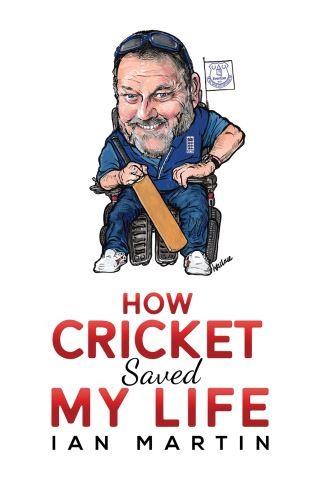 How Cricket Saved My Life

An honest, often sad but humorous account of life inside a body that no longer does as it is told!
Ian Martin was a sports-loving youngster. When he realised he was more enthusiastic than talented enough to make a career out of playing sport he left home and joined the Royal Navy. This book tells the story of his experiences at sea onboard HMS Ark Royal, his service during the first Gulf War on HMS London and his subsequent medical discharge after being diagnosed with a neuro-muscular condition. Ian talks about the impact of the diagnosis, his deterioration and mental health battles and how cricket helped him transition into a wheelchair and to him finding himself, and a new career.
It’s a tale of rejection, dreams, discovery, determination, resilience and, ultimately, success via the floors of many hotel bathrooms and scrapes with airport security.

Ian Martin: Ian Martin is married with two children and lives in North East Wales. He is a Royal Navy veteran having served on HMS Ark Royal and HMS London during the first Gulf War. He was diagnosed with a neuro-muscular condition in 1994 and medically discharged from the Navy. For the last 20 years he has played a leading role in developing the sport of cricket for people with disabilities, becoming the England and Wales Cricket Board’s first full-time Disability Manager in 2007. He has led 17 overseas cricket tours and overseen the growth in participation of disabled people in cricket to over 70,000 people. He is a Trustee of the Lord’s Taverners and The Neuro-Muscular Centre in Winsford, Cheshire. Ian is a member of The Marylebone Cricket Club and is a season ticket holder at Everton Football Club.