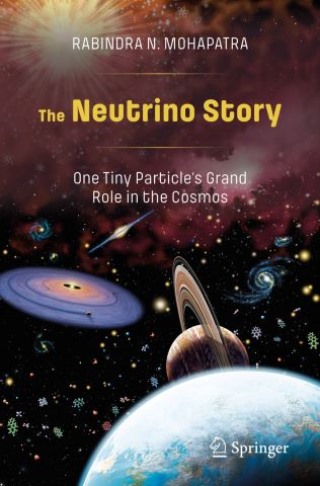 The Neutrino Story: One Tiny Particle’s Grand Role in the Cosmos

Every second of every day, we are exposed to billions of neutrinos emitted by the Sun, and yet they seem to pass straight through us with no apparent effect at all. Tiny and weakly interacting this subatomic particle may be, but this book will show you just how crucial a role it has played in the evolution of the elements in the universe, and eventually, ourselves.

We first start with an introduction to the basics of subatomic physics, including brief backgrounds on the discoveries that set the stage for major 20th century advances. The author, a distinguished theoretical physicist who has researched neutrinos for over thirty years, next explains in nontechnical language how and why the neutrino fits into the wider story of elementary particles. Finally, the reader will learn about the latest discoveries in the past half century of neutrino studies.

This semi-popular science book will appeal to any physics students or non-specialist physicists who wish to know more about the neutrino and its role in the evolution of our universe.

Mohapatra has worked extensively on neutrino physics. He is one of the proponents of the seesaw mechanism for neutrino masses and the left-right symmetric theories of weak interactions. He is also the co-proponent of the new particle related to neutrino mass called the “majoron.” He suggested the idea of neutron-anti-neutron oscillation, which led to many experimental searches for this process.

Mohapatra has several seminal papers on grand unified theories of particles and forces. He also co-authored a paper on the possibility that there may be a small violation of the celebrated Pauli Exclusion Principle in Quantum Mechanics, which led to several experimental searches for this effect. Mohapatra published a single-author book on “Unification and Supersymmetry: Frontiers of Quark Lepton Physics” published by Springer-Verlag, which went into third edition in 2003, and coauthored a  book on “Massive Neutrinos in Physics and Astrophysics” published by World Scientific, which also went into a third edition in 2004.