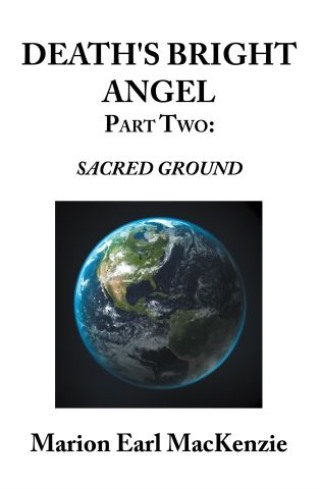 Sacred Ground is the sequel to Death’s Bright Angel, Part One: The Prophecy. The novel incorporates characters from both the Blackthorn and Silverwood Trilogies., tying together all of the author's previous novels. There are two Time Streams: 2016 and 2018/19, so the past and present are juxtaposed. As the story opens, Dr. Glen Abbott has awakened from a coma following surgery to remove a benign lesion from his brain, only to realize that he is now living two plus years in the past (2016). His young daughter, Hannah, after her transformation into the supreme spiritual being, Gaia Magni, during Samhain, The First Rite of Winter (2018), has sent him back in time to relive a portion of his life over again to free him from the heartbreak and despair of losing his wife and daughter. But there are numerous challenges ahead for Abbott as he attempts to navigate his way through his second life with knowledge of the future before him. Gaia Magni is the fulfillment of a Druid Prophecy. A supreme spiritual being, she is charged with restoring harmony and balance to Nature and preventing an Apocalypse, a Sixth Extinction Level Event (ELE) as the result of humanity’s relentless assault on Mother Earth. Armed with the Wisdom of the Ancients and the power of Dark Energy, Gaia Magni is truly omnipotent with powers unimaginable. She begins her campaign to rescue Earth and the Biosphere by first demonstrating her power to the world by affecting a global blackout that turns the Earth into a Black Marble. Though an “enlightened spirit”, Gaia Magni makes it clear to everyone that she is prepared, if necessary, to wipe humanity from the face of the Earth in order to protect the millions of other species in the Biosphere on the brink of extinction as a result of humanity’s wanton destruction of the natural world. But there are those in governments and billion-dollar corporations who vigorously oppose the Rules of Natural Law that Gaia Magni has imposed and resist The Way Forward. They are intent on keeping their wealth and power at all costs, even if it means the end of humanity…