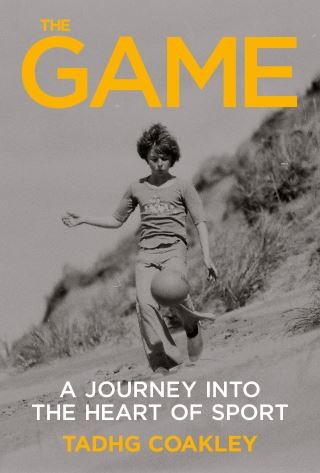 A Journey Into the Heart of Sport

This book is a multifaceted reflection on sport. It is part memoir, outlining Tadhg Coakley’s time as a player and fan of sport and how it has shaped his life. It is also a book of essays critiquing several aspects of sport, both good and bad, and showing its influence in the wider world. It is also a work of auto-fiction, wherein Coakley uses his novelistic abilities to chart narratives, personal and public. It is, finally, a work of scholarship, brilliantly interweaving the author’s view of a life spent inside and outside the white lines with the cultural discourse of previous writers and thinkers on the many themes explored. The book is an exploration and explanation of what sport means, why it is the world's largest single consumer product and such a dominant/pervasive presence in Irish culture. Why, for example, were the terms ‘European Championships’ and ‘Premier League’ the top Google searches in Ireland for 2021? Why was Christian Eriksen the most searched person? In this book Tadhg Coakley interacts with sport in the way that Olivia Laing interacts with isolation (The Lonely City) Sinéad Gleeson and Emilie Pine interact with the female body and female experiences (Constellations and Notes to Self), Doireann Ní Ghríofa interacts with being haunted by an eighteen-century poet (A Ghost in the Throat) and Fintan O’Toole interacts with Irish history (We Don’t Know Ourselves). This is a book that needed to be written. We are consuming sport in ever-greater gulpfuls – often blindly. The ‘coverage’ of sport is vast: newspapers, magazines, books, a whole raft of TV channels in many languages, websites, podcasts, blogs, radio stations, hourly sports bulletins with every news cycle. Why is that, and what does it mean? The book does not romanticise or idealise sport. Sport has a dark side and is rife with greed, corruption, sexism, homophobia, nationalism and a raft of toxic masculine behaviour – and the author interrogates his own behaviour and attitudes in respect of some of these. On the other hand, in sport – as in art – people can forge their own identities in grace, imagination and the possibility of what may be. This contradictory duality and the cognitive dissonance it carries with it is one of the most fascinating aspects of sport. Sport, like story, is mostly about loss. Ultimately, sport, like story, is about what happens to the fans outside the white lines and, for the readers off the page.

Tadhg Coakley: Tadhg Coakley is from Cork. His debut novel, The First Sunday in September (2018), was shortlisted for the Mercier Press Fiction prize. His second, Whatever It Takes, was chosen as the 2020 Cork, One City One Book. Tadhg’s short stories, articles and essays have been published in The Stinging Fly, Winter Papers, and The Irish Times, and he writes about sport for the Irish Examiner.