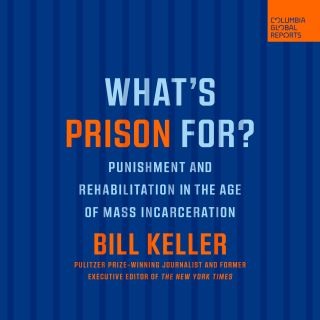 Punishment and Rehabilitation in the Age of Mass Incarceration

What's Prison For? examines the “incarceration” part of mass incarceration. Our prisons remain a shameful waste of lives and money, feeding a pathological cycle of poverty, community dysfunction, crime and hopelessness. What is the alternative? This book makes the case for better rehabilitation and examines attempts to assure that people return from prison better equipped than when they arrived for the challenges life presents.

Bill Keller: Bill Keller is founding editor of The Marshall Project, an independent non-profit focused on crime and punishment in the U.S. He previously spent 30 years at The New York Times as a correspondent, editor, and op-ed columnist. During his eight years as The Times’ executive editor, the paper won 18 Pulitzer Prizes, expanded its audience and newsroom staff, and adapted to the internet. In 1989 he won a Pulitzer Prize for his coverage of the collapse of the Soviet Union. He lives in New York.