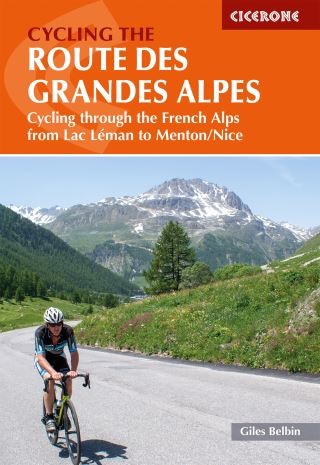 Cycling through the French Alps from Lac Leman to Menton/Nice

Abounding in history and dotted with cols coloured by stories about the world's greatest cyclists, the Route des Grandes Alpes (RdGA) is a must for competent, hill-hungry cycle tourers. Covering some 720km from Lake Geneva (Lac Léman) to mediterranean Nice, the route is described across 14 stages and can be completed in anywhere from 7 to 14 days - depending on how you'd like to spread out the 17,000m of climbing. Six variants are also described, ensuring no holiday is compromised or cut short if a col on route is closed. Clear and concise route descriptions are provided for each stage (and variant), together with 1:150K mapping and extremely helpful gradient profiles. Also included is invaluable practical advise - everything from bicycle selection (including eBikes) and nutrition in the saddle, to logistical planning and accommodation options. Showcasing some of the world's best Alpine cycling, the RdGA takes in 17 major climbs, including the famous Col de l'Iseran (the highest paved pass in the Alps), the Col du Galibier (favourite climb of Tour de France founder, Henri Desgrange) and the Col d'Izoard (synonymous with cycling legends Fausto Coppi and Louison Bobet). It also passes through some of the most spectacular national parks in France, including the Vanoise, the Écrins and the Mercantour.

Giles Belbin: Giles Belbin is a cycling writer and author based in southwest England. His work has appeared in numerous publications including Cyclist, Ride Cycling Review, Cycling Weekly, Procycling and Rouleur. He first rode his bike in the French Alps in 2006 while watching the Tour de France, falling off his bike near the top of the Col du Galibier in exhaustion. He has been a frequent visitor ever since.