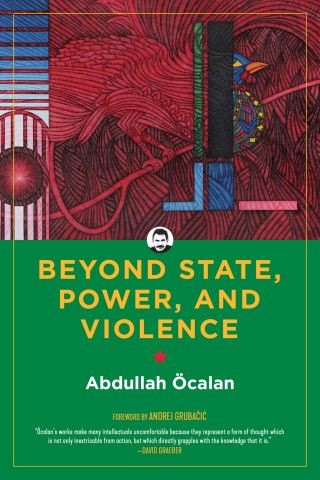 Beyond State, Power, and Violence

After the dissolution of the PKK (Kurdistan Workers’ Party) in 2002, internal discussions ran high, and fear and uncertainty about the future of the Kurdish freedom movement threatened to unravel the gains of decades of organizing and armed struggle. From his prison cell, Abdullah Öcalan intervened by penning his most influential work to date: Beyond State, Power, and Violence. With a stunning vision of a freedom movement centered on women’s liberation, democracy, and ecology, Öcalan helped reinvigorate the Kurdish freedom movement by providing a revolutionary path forward with what is undoubtedly the furthest-reaching definition of democracy the world has ever seen. Here, for the first time, is the highly anticipated English translation of this monumental work.

Beyond State, Power, and Violence is a breathtaking reconnaissance into life without the state, an essential portrait of the PKK and the Kurdish freedom movement, and an open blueprint for leftist organizing in the twenty-first century, written by one of the most vitally important political luminaries of today.

By carefully analyzing the past and present of the Middle East, Öcalan evaluates concrete prospects for the Kurdish people and arrives with his central proposal: recreate the Kurdish freedom movement along the lines of a new paradigm based on the principles of democratic confederalism and democratic autonomy. In the vast scope of this book, Öcalan examines the emergence of hierarchies and eventually classes in human societies and sketches his alternative, the democratic-ecological society. This vision, with a theoretical foundation of a nonviolent means of taking power, has ushered in a new era for the Kurdish freedom movement while also offering a fresh and indispensable perspective on the global debate about a new socialism. Öcalan’s calls for nonhierarchical forms of democratic social organization deserve the careful attention of anyone interested in constructive social thought or rebuilding society along feminist and ecological lines.

Abdullah Öcalan actively led the Kurdish liberation struggle as the head of the PKK from its foundation in 1978 until his abduction on February 15, 1999. He is still regarded as a leading strategist and the most important political representative of the Kurdish freedom movement. Under isolation conditions at Imralı Island Prison, Öcalan authored more than ten books that revolutionized Kurdish politics. Several times he initiated unilateral cease-fires of the guerrilla and presented constructive proposals for a political solution to the Kurdish issue. For several years, Turkish state authorities led a “dialogue” with Öcalan. Ever since the government broke off the talks in April 2015, he has been held in total isolation at Imralı Island Prison, with no contact whatsoever with the outside world.