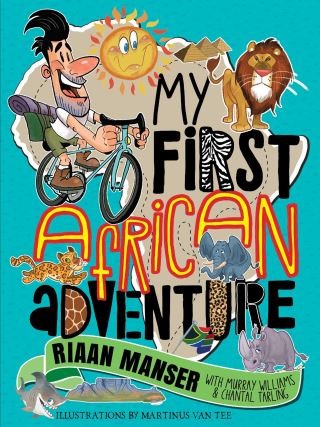 THIS BOOK IS A CHILD'S FIRST TASTE OF THE MAGICAL CONTINENT!

In My First African Adventure, Riaan Manser allows the reader to relive the toil, excitement and occasional terror of his journey - negotiating the Sahara and Libyan deserts, learning French, Portuguese and Arabic, eating monkey, rat and bat, standing in front of the pyramids, being awarded the freedom of the Red Sea in Egypt, feeding hyenas mouth to mouth, and standing on the highest, as well as at the lowest, points in Africa. Riaan arrived safely in Cape Town on 25 November 2005. Now, for the first time, children can relive this amazing journey of discovery in a fun, illustrated version of the original journey. Crammed with fun facts and information, My First African Adventure will entertain young and old for years to come.

Parents and children are invited to join one of the world's great modern-day adventurers, Riaan Manser, as he explores Africa by bicycle!

Riaan Manser’s rise to prominence began with the unbelievable worldfirst
circumnavigation of the African continent by bicycle. It took him
exactly two years, two months & fifteen days, alone & unaided, he
pedalled a staggering 34 500 kilometres (22 680 miles) through 34
different countries, some of them ranked as the most dangerous & most
inhospitable places in our world today. Manser’s achievement earned him
the title “Out There Adventurer of the Year 2006” & his first book, “Around
Africa on my Bicycle”, became a bestseller & continues to enjoy huge
success.
For more information on Riaan’s adventures, check out his website:
https://www.riaanmanser.com/