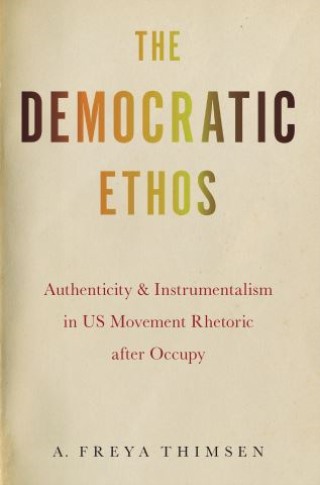 Authenticity and Instrumentalism in US Movement Rhetoric after Occupy

What did Occupy Wall Street accomplish? While it began as a startling disruption in politics as usual, in The Democratic Ethos Freya Thimsen argues that the movement's long-term importance rests in how its commitment to radical democratic self-organization has been adopted within more conventional forms of politics. Occupy changed what counts as credible democratic coordination and how democracy is performed, as demonstrated in opposition to corporate political influence, rural antifracking activism, and political campaigns.

By comparing instances of progressive politics that demonstrate the democratic ethos developed and promoted by Occupy and those that do not, Thimsen illustrates how radical and conventional rhetorical strategies can be brought together to seek democratic change. Combining insights from rhetorical studies, performance studies, political theory, and sociology, The Democratic Ethos offers a set of conceptual tools for analyzing anticorporate democracy-movement politics in the twenty-first century.

A. Freya Thimsen is an assistant professor in the English Department at Indiana University. Her work has been published in journals including Philosophy & Rhetoric, Quarterly Journal of Speech, and Review of Communication.