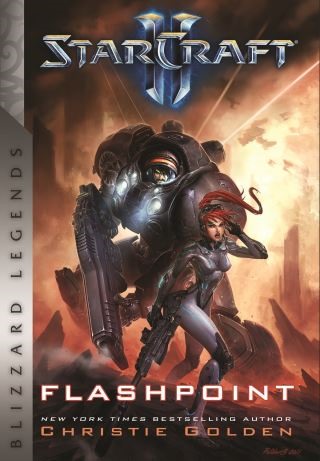 The explosive novel based on the eagerly anticipated StarCraft II video game expansion, Heart of the Swarm!

The sinister zerg leader no longer commands her legions of bloodthirsty aliens against the humans of the Koprulu sector, all thanks to the combined courage and tenacity of Jim Raynor, General Horace Warfield, and a mismatched team of Dominion soldiers and outlaw rebels. Although the queen is no more, Sarah Kerrigan is very much alive. The woman who once controlled countless alien minds in a rampage across the stars has been spirited away by the man who dethroned her. Now Arcturus Mengsk’s Dominion armada is on her heels, roaring for blood. Jim Raynor will need to test his strength, his wit, and his loyalties against impossible odds to protect the woman he loves. StarCraft II: Flashpoint bridges the events that take place in StarCraft II: Wings of Liberty and the upcoming StarCraft II: Heart of the Swarm. Featuring never-before-seen glimpses into Jim Raynor and Sarah Kerrigan’s past, this novel opens a window into a world of passion, action, and adventure.

Warcraft.  Starcraft.  Star Wars.  Star Trek.  Christie Golden has written for all of them.  As if that were not accomplishment enough, she has also contributed novels to the gaming and movie universes of HALO, Invasion America, Fable, Hex, Dungons and Dragons, Ravenloft, and Assassin’s Creed.

That is why the International Association of Media Tie-In Writers is overjoyed to present Ms. Golden with the 2017 Faust Award.  The talent she has brought to so many diverse franchises has thrilled numerous fanbases over the past quarter century.  She has written several short stories and fifty novels, eight of which have landed on the New York Times' bestseller list.  In addition, she found the time to write original fiction as well.

It is a great pleasure to add Christie Golden to the list of Grandmasters that the IAMTW is proud to call members.

IAMTW (www.iamtw.org) is a professional organization for authors of books based on TV shows, movies, games—and even based on songs. The organization is dedicated to educating the public about our field, enhancing the professional status of our members, and to providing a forum for tie-in writers to share information, support one another, and discuss issues relating to our industry.