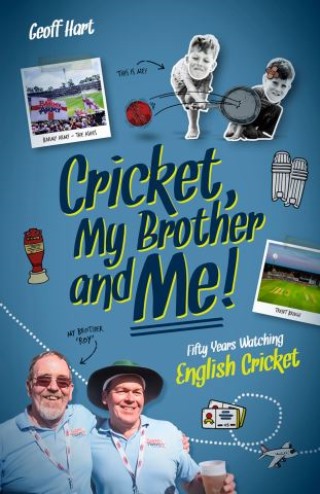 Cricket, My Brother and Me

As a toddler, Geoff plays a straight bat with a frying pan, knocking his brother unconscious. They both survive and go on to share an obsession with cricket. From playing as kids in oversized pads, they become recreational cricketers and devotees of England and Notts. Cricket, My Brother and Me is rich in humorous anecdotes and personal memories of 50 eventful years playing and watching cricket. Accounts of early life as cricketers see the brothers trying to emulate their heroes and failing miserably, finally settling for the role of spectator. Memories include the torture and the glory of watching the Ashes, touring abroad and the more sedate joys of county cricket. The book describes the brothers' fraught first encounter with the Barmy Army and later touring as part of the world's greatest supporters' club. Ardent fans will enjoy the serious reflections on cricket and politics and thoughts on the future of the sport. This is a 'must read' for cricket lovers and for those intrigued as to why cricket can inflame such passion.

Geoffrey Hart: Geoff Hart is the author of five books including Bulgaria: Unfinished Business, the go-to book for Brits considering moving to Bulgaria, and Seeking Utopia: A Lifetime in Social Work, the often hilarious story of his 40 years as a children's social worker. He has also written three novels. Fluent in German, Geoff is currently translating a successful children's book, Flamme im Wind, written by Paula Millotat, his German mother-in-law.