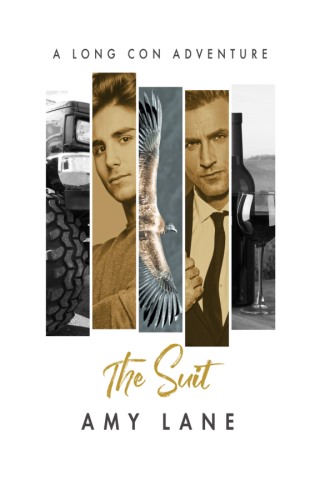 Two and a half years ago, Michael Carmody made the biggest mistake of his life. Thanks to the Salinger crew, he has a second chance. Now he’s working as their mechanic and nursing a starry-eyed crush on the crew’s stoic suit, insurance investigator and spin doctor Carl Cox.

Carl has always been an almost-ran, so Michael’s crush baffles him. When it comes to the Salingers, he’s the designated wet blanket. But watching Michael forge the life he wants instead of the one he fell into inspires him. In Michael’s eyes, he isn’t an almost-ran—he just hasn’t found the right person to run with. And while the mechanic and the suit shouldn’t have much to talk about, suddenly they’re seeking out each other’s company.

Then the Salingers take a case from their past, and it’s all hands on deck. For once, behind-the-scenes guys Michael and Carl find themselves front and center. Between monster trucks, missing women, and murder birds, the case is a jigsaw puzzle with a lot of missing pieces—but confronting the unknown is a hell of a lot easier when they’re side by side.

Award winning author Amy Lane lives in a crumbling crapmansion with a couple of teenagers, a passel of furbabies, and a bemused spouse. She has too damned much yarn, a penchant for action-adventure movies, and a need to know that somewhere in all the pain is a story of Wuv, Twu Wuv, which she continues to believe in to this day! She writes contemporary romance, paranormal romance, urban fantasy, and romantic suspense, teaches the occasional writing class, and likes to pretend her very simple life is as exciting as the lives of the people who live in her head. She’ll also tell you that sacrifices, large and small, are worth the urge to write.