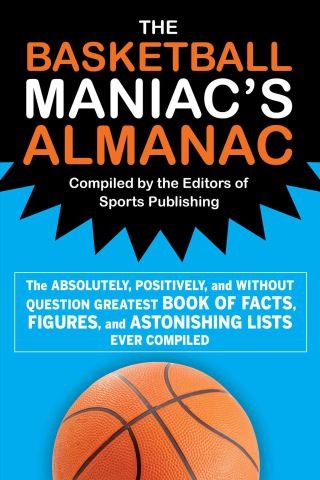 The Absolutely, Positively, and Without Question Greatest Book of Fact, Figures, and Astonishing Lists Ever Compiled

Part reference, part trivia, part brain teaser, and absolutely the most unusual and thorough compendium of basketball stats and facts ever assembled!

Did you know that Wilt Chamberlain and Wes Unseld are the only two players in basketball history to win both the Rookie of the Year and Most Valuable Player awards in the same season? Or that Mark Jackson had more than 10,000 assists in his career, but is not in the Hall of Fame? How about that Kevin Love has the longest consecutive streak of double-doubles, with 53?

Inspired by The Baseball Maniac’s Almanac—first created by legendary sportswriter Bert Randolph Sugar—The Basketball Maniac’s Almanac includes thousands of fascinating lists, tables, data, and stimulating facts never before compiled in one place! Inside, you’ll find all of the big name basketball heroes like Bill Russell, Michael Jordan, Larry Bird, LeBron James, Rick Barry, Kevin Durant, Jerry West, Ray Allen, Kobe Bryant, and a lot of information that will be new to even the most devoted fans:

Not just a collection of facts or records, this is a book of glorious fun that will astound even the most bookish basketball fan. Read up and amaze your friends, family, and anyone who loves the game of basketball!