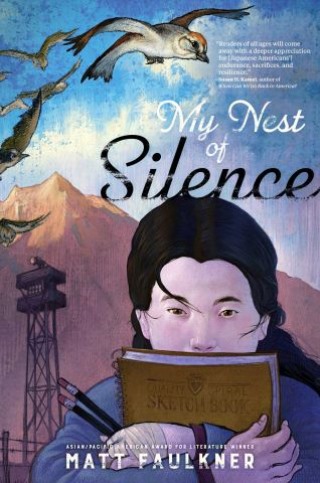 My Nest of Silence

“Evocative prose and illustrations bring to life…[the] heart-wrenching decisions and considerations that Japanese Americans had to face…[and] their endurance, sacrifices, and resilience, even as their loyalty was questioned without cause.” —Susan H. Kamei, author of When Can We Go Back to America?

Told in a brilliant blend of prose and graphic novel, this unforgettable middle grade story about a Japanese American family during World War II is written and illustrated by Asian/Pacific American Award for Literature winner Matt Faulkner.

Manzanar is nothing like home. Yet the relocation center is where Mari and her family have to live, now that the government has decided that Japanese Americans aren’t American enough. Determined to prove them wrong, Mari’s brother Mak has joined the army and is heading off to war. In protest, Mari has stopped talking for the duration of the war. Or at least until Mak comes home safe.

Still, Mari has no trouble expressing herself through her drawings. Mak, too, expresses himself in his letters home, first from training camp and later from the front lines of World War II, where he is fighting with the 442nd Regimental Combat Team. But while his letters are reassuring, reality is not: Mak is facing danger at every turn, from racism within the army to violence on the battlefield.

In turns humorous and heartbreaking, Mari and Mak’s story will stick with readers long after the last page.

Matt Faulkner: Matt Faulkner is an acclaimed illustrator who has written and illustrated more than thirty books, including Gaijin: American Prisoner of War, which won the Asian/Pacific American Librarians Association Literature Award. He is married to author and children’s librarian, Kris Remenar. Visit him at MattFaulkner.com.