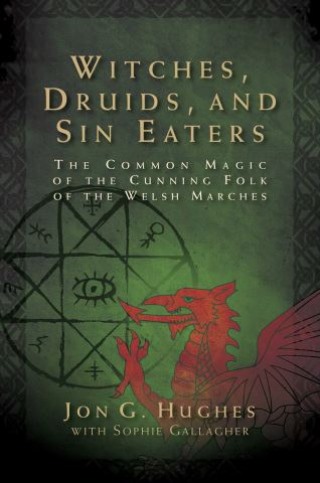 The Common Magic of the Cunning Folk of the Welsh Marches

• Describes the arcane rituals, ancient beliefs, and secret rites of the Welsh Marches, including those of the Sin Eaters, Eye Biters, and Spirit Hunters

• Shares extracts from ancient texts stored in the archives of the National Museum of Wales, along with many original photographs of related artifacts

• Includes a Grimoire of the Welsh Marches, a wide collection of spells and magical workings along with practical instruction on crafting and casting

In this collaboration between a Druid and a witchcraft researcher, Jon G. Hughes and Sophie Gallagher describe in intricate detail the arcane rituals, ancient beliefs, and secret rites of the Welsh Marches, the borderlands between Celtic Wales and Anglo-Saxon England--one of the oldest and most significant locations for early witchcraft and a lasting repository for ancient Druidic lore. The authors explore the repressed rituals and practices of sin eaters, those who take upon themselves the sins of a recently deceased person; eye biters, powerful Witches able to cast malevolent curses simply by looking at their victims; and spirit hunters, Witches who gain control of their victim’s spirit. Drawing on their personal access to the archives of the National Museum Wales, as well as the local museums found within the Welsh Marches, the authors share extracts from ancient texts, along with original photographs of related artifacts, such as charm and spell bottles used to ward off evil and “poppets,” wax effigies crafted by Witches to inflict pain and death on a targeted subject. In the second half of the book, the authors present a Grimoire of the Welsh Marches, a wide collection of spells and magical workings along with practical instruction on crafting and casting.

Offering a comprehensive look at the earth-based beliefs and practices of primal witchcraft and Druidic lore, the authors show not only how the traditions of the Welsh Marches had a profound influence on the cultural and spiritual history of the British Isles but also how their influence was exported to all corners of the world.

Jon G. Hughes: Jon G. Hughes, author of Celtic Sex Magic, is part of a lineage of druids that has been practicing for five generations in a remote area of Wales. He is now teaching the tradition at his home in western Ireland and gives workshops and seminars throughout Europe under his Welsh name of Cynon. He is the director of the Irish Centre for Druidic Practices.