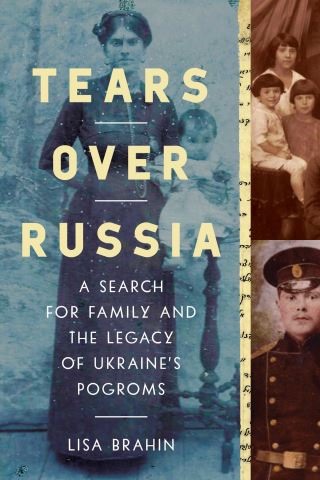 A Search for Family and the Legacy of Ukraine's Pogroms

A sweeping saga of a family and community fighting for survival against the ravages of history.

Set between events depicted in Fiddler on the Roof and Schindler’s List, Lisa Brahin’s Tears over Russia brings to life a piece of Jewish history that has never before been told.

Between 1917 and 1921, twenty years before the Holocaust began, an estimated 100,000 to 250,000 Jews were murdered in anti-Jewish pogroms across the Ukraine. Lisa grew up transfixed by her grandmother Channa’s stories about her family being forced to flee their hometown of Stavishche, as armies and bandit groups raided village after village, killing Jewish residents. Channa described a perilous three-year journey through Russia and Romania, led at first by a gallant American who had snuck into the Ukraine to save his immediate family and ended up leading an exodus of nearly eighty to safety.

With almost no published sources to validate her grandmother’s tales, Lisa embarked on her incredible journey to tell Channa’s story, forging connections with archivists around the world to find elusive documents to fill in the gaps of what happened in Stavishche. She also tapped into connections closer to home, gathering testimonies from her grandmother’s relatives, childhood friends and neighbors.

The result is a moving historical family narrative that speaks to universal human themes—the resilience and hope of ordinary people surviving the ravages of history and human cruelty. With the growing passage of time, it is unlikely that we will see another family saga emerge so richly detailing this forgotten time period. Tears Over Russia eloquently proves that true life is sometimes more compelling than fiction.

Lisa Brahin: Lisa Brahin is an accomplished Jewish genealogist and researcher. In 2003, she helped rediscover the lost location of the original hand-written manuscript Megilat HaTevah (Scroll of the Slaughter), which she considers one of the most important documents ever recorded on the Russian pogroms. A graduate of George Washington University's Columbian College, she is a two-town project coordinator for Jewishgen.org's international Yizkor Book Project (Holocaust Memorial Book Project).