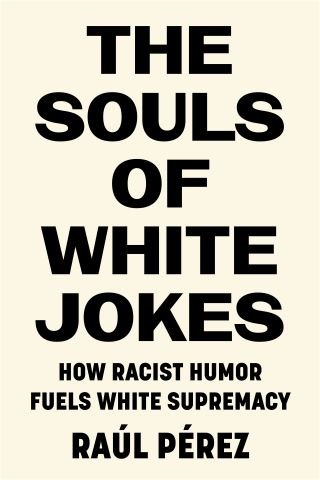 The Souls of White Jokes

A rigorous study of the social meaning and consequences of racist humor, and a damning argument for when the joke is not just a joke.

Having a "good" sense of humor generally means being able to take a joke without getting offended—laughing even at a taboo thought or at another's expense. The insinuation is that laughter eases social tension and creates solidarity in an overly politicized social world. But do the stakes change when the jokes are racist? In The Souls of White Jokes Raúl Pérez argues that we must genuinely confront this unsettling question in order to fully understand the persistence of anti-black racism and white supremacy in American society today.

W.E.B. Du Bois's prescient essay "The Souls of White Folk" was one of the first to theorize whiteness as a social and political construct based on a feeling of superiority over racialized others—a kind of racial contempt. Pérez extends this theory to the study of humor, connecting theories of racial formation to parallel ideas about humor stemming from laughter at another's misfortune. Critically synthesizing scholarship on race, humor, and emotions, he uncovers a key function of humor as a tool for producing racial alienation, dehumanization, exclusion, and even violence. Pérez tracks this use of humor from blackface minstrelsy to contemporary contexts, including police culture, politics, and far-right extremists. Rather than being harmless fun, this humor plays a central role in reinforcing and mobilizing racist ideology and power under the guise of amusement.

The Souls of White Jokes exposes this malicious side of humor, while also revealing a new facet of racism today. Though it can be comforting to imagine racism as coming from racial hatred and anger, the terrifying reality is that it is tied up in seemingly benign, even joyful, everyday interactions as well— and for racism to be eradicated we must face this truth.

Raúl Pérez: Raúl Pérez is Assistant Professor of Sociology at the University of La Verne. His work has been published in American Behavioral Scientist, Discourse and Society, Ethnicities, and Sociological Perspectives, and featured in Time, The Grio, Latino Rebels, and Zócalo Public Square.