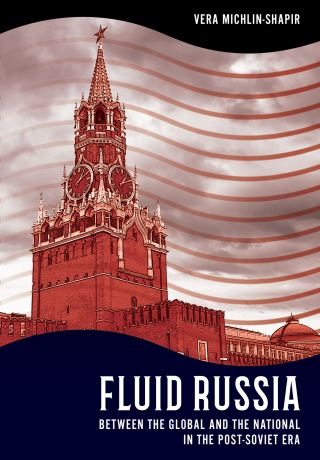 Between the Global and the National in the Post-Soviet Era

Fluid Russia offers a new framework for understanding Russian national identity by focusing on the impact of globalization on its formation, something which has been largely overlooked. This approach sheds new light on the Russian case, revealing a dynamic Russian identity that is developing along the lines of other countries exposed to globalization. Vera Michlin-Shapir shows how along with the freedoms afforded when Russia joined the globalizing world in the 1990s came globalization's disruptions.

Michlin-Shapir describes Putin's rise to power and his project to reaffirm a stronger identity not as a uniquely Russian diversion from liberal democracy, but as part of a broader phenomenon of challenges to globalization. She underlines the limits of Putin's regime to shape Russian politics and society, which is still very much impacted by global trends. As well, Michlin-Shapir questions a prevalent approach in Russia studies that views Russia's experience with national identity as abnormal or defective, either being too week or too aggressive.

What is offered is a novel explanation for the so-called Russian identity crisis. As the liberal postwar order faces growing challenges, Russia's experience can be an instructive example of how these processes unfold. This study ties Russia's authoritarian politics and nationalist rallying to the shortcomings of globalization and neoliberal economics, potentially making Russia "patient zero" of the anti-globalist populist wave and rise of neo-authoritarian regimes. In this way, Fluid Russia contributes to the broader understanding of national identity in the current age and the complexities of identity formation in the global world.