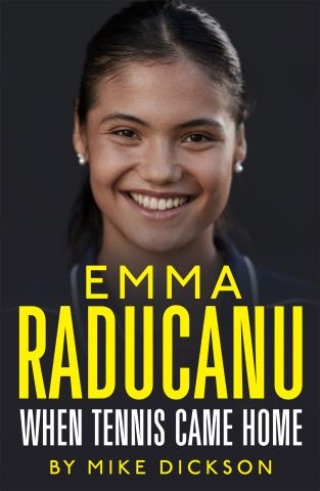 'Is there any expectation? I'm a qualifier, so there's no pressure on me!'

In 2021, Emma Raducanu shocked and charmed the tennis world as she raced to the US Open title with a smile on her face. But how did a little-known 18-year-old from Kent become the first ever qualifier to win a Major?

Now Mike Dickson, who as Tennis Correspondent of the Daily Mail was one of the few journalists present in New York to see her lift the trophy, reveals what it took to become Britain's first woman Grand Slam champion since Virginia Wade in 1977.

Drawing on interviews with key figures in Raducanu's development, he has written a fascinating account of a remarkable journey. From her early days falling in love with the game as a young girl in Bromley and the years of hard work and dedication that followed, he traces the ups and downs of a junior career that took her to the furthest reaches of the international circuit.

But it was her breakthrough on home turf at Wimbledon, just weeks after sitting her A-levels, that really grabbed the attention of the public. It led to her first prolonged spell on the full professional tour - a life-changing trip around the hard-court tournaments of America which culminated in her unexpected triumph at Flushing Meadows.

Full of authoritative insights and eye-opening details, Emma Raducanu: When Tennis Came Home paints an inspiring and compelling picture of one of the brightest new stars in British sport.

Mike Dickson: Mike Dickson is a sportswriter with the Daily Mail, where he has held the position of Cricket Correspondent and Tennis Correspondent. Originally from the Wirral, Mike and his family live in Wimbledon. The books to which he has contributed include the Sunday Times bestseller Bob Willis: A Cricketer and a Gentleman.