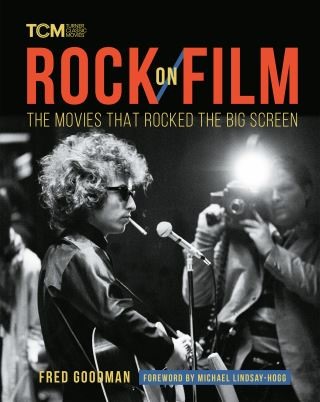 The Movies That Rocked the Big Screen

For rock music and film buffs alike, this is the ultimate guide exploring the electrifying, entertaining, and often daring marriage of rock & roll and cinema.

When the use of Bill Haley’s “Rock Around the Clock” turned 1955’s Blackboard Jungle into a teen sensation and a box-office smash, it proved the opening shot in a cinematic and cultural revolution. Starting with Elvis Presley and the teensploitation films of the ’50s and ’60s, in Rock on Film award-winning author and former Rolling Stone editor Fred Goodman takes readers on a wide-ranging journey through film and pop history. Along the way, he measures the transformative impact of the mid-’60s landmarks A Hard Day’s Night and Dont Look Back and how they seeded an almost unbelievably broad genre of films made by increasingly ambitious musicians and filmmakers across the past seven decades.

From the carefree to the complex, the mindless to the mind-bending, rock films have staked out their own turf by simultaneously celebrating innocence and challenging artistic and social conventions. With an insightful round-up of fifty must-see rock films spanning crowd-pleasers, art-house favorites, underground gems, and undisputed classics, Rock on Film surveys the nearly seventy-year canon of a genre like no other.

A series of original interviews with Cameron Crowe, Jim Jarmusch, Penelope Spheeris, Taylor Hackford, and John Waters illuminates how rock has influenced the work of some of the most divergent and thoughtful directors in movie history. Illustrated throughout by more than 150 full-color and black-and-white images, Rock on Film brings the history of music in the movies to vivid life.

Fred Goodman: Fred Goodman is a former editor at Rolling Stone, whose work has appeared in the New York Times and many other publications. His previous books include the award-winning The Mansion on the Hill: Dylan, Young, Geffen, Springsteen and the Head-on Collision of Rock and Commerce and Why Lhasa de Sela Matters. He lives in New York.