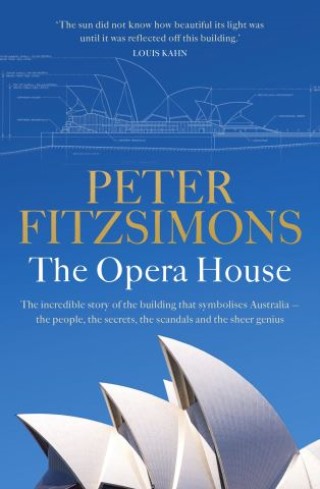 The extraordinary story of the building that symbolises Australia — the people, the secrets, the scandals and the sheer genius

'The sun did not know how beautiful its light was until it was reflected off this building.'
- Louis Kahn, US architect

If only these walls and this land could talk ...

The Sydney Opera House is a breathtaking building, recognised around the world as a symbol of modern Australia. Along with the Taj Mahal and other World Heritage sites, it is celebrated for its architectural grandeur and the daring and innovation of its design. It showcases the incomparable talents involved in its conception, construction and performance history.

But this stunning house on Bennelong Point also holds many secrets and scandals. In his gripping biography, Peter FitzSimons marvels at how this magnificent building came to be, details its enthralling history and reveals the dramatic stories and hidden secrets about the people whose lives have been affected, both negatively and positively, by its presence.

He shares how a conservative 1950s state government had the incredible vision and courage to embark on this nation-defining structure; how an architect from Denmark and construction workers from Australia and abroad invented new techniques to bring it to completion; how ambition, betrayal, professional rivalry, sexual intrigue, murder, bullying and breakdowns are woven into its creation; and how it is now acknowledged as one of the wonders and masterpieces of human ingenuity.

In The Opera House, Peter FitzSimons captures the extraordinary stories around this building that are as mesmerising as the light catching on its white sails.

Peter FitzSimons is Australia's bestselling non-fiction writer, and for the past 35 years has also been a journalist and columnist with the SYDNEY MORNING HERALD and the SUN-HERALD.

He is the author of a number of highly successful books, including BREAKER MORANT, BURKE AND WILLS, MONASH'S MASTERPIECE, KOKODA, NED KELLY and GALLIPOLI, as well as biographies of such notable Australians as Sir Douglas Mawson, Nancy Wake and Nick Farr-Jones. His passion is to tell Australian stories, our own stories: of great men and women, of stirring events in our history.

Peter grew up on a farm north of Sydney, went to boarding school in Sydney and attended Sydney University. An ex-Wallaby, he also lived for several years in rural France and Italy, playing rugby for regional clubs. He and his wife Lisa Wilkinson - journalist, magazine editor and television presenter - have three children; they live in Sydney.