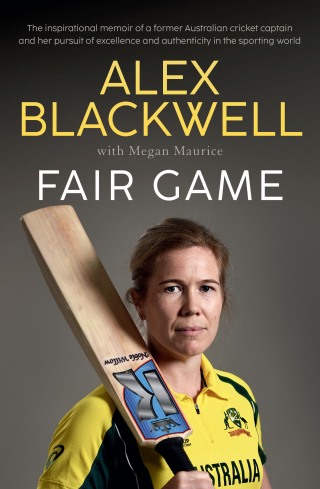 Alex Blackwell lived and breathed our national sport of cricket for thirty years.

Starting as a kid, she spent her childhood and teen years playing and competing with her identical twin, Kate, who was equally devoted to the bat and ball. But it was Alex who went on to consolidate a spot in the national side, eventually rising to the captaincy, notching up an eye-watering list of sporting achievements and earning her a name as one of the greats of the game.

But life off field brought challenges of its own. From her professional debut, Alex was unafraid to call out hypocrisy and go in to battle against the traditional hierarchies of the game. Speaking out and becoming a passionate advocate for women and LGBTIQ+ people in sport won her many fans and much respect, but it didn't come without a price.

Fair Game is an unflinching account of life in Australia's most loved sporting team, told by one of its most lauded members. It reveals not only the extreme dedication and skill it takes to be the best, but also how it feels to be on the outer - even as one of the game's most decorated players.

Representing Australia 251 times across Tests, one day internationals and T20 matches, no woman in history has played more matches for the Australian Women's cricket team than Alex Blackwell. And no one knows better both the extreme highs and devastating lows that come with playing this majestic but at times brutal game at the highest level.

Alex Blackwell: Alex Blackwell is a former Australian women's cricket captain who represented Australia 251 times across Tests, One Day Internationals and T20 Internationals, with the team winning the World Cup and The Ashes under her captaincy. Since her retirement in late 2019 Alex has continued to be involved in the game as a board member, commentator, and media spokesperson. After initially studying medicine at university - and having to change degrees so she could play cricket for Australia - she now works as a genetic counsellor in addition to being a commentator on Fox Sports and ABC Grandstand. She is a patron of Pride in Sport and the LBW Trust of Australia, an ambassador of the Primary Club, a Doctor of the University of New South Wales and a former non-executive director of Cricket NSW. In 2021 Alex was awarded an honorary life membership of the Marylebone Cricket Club.|||