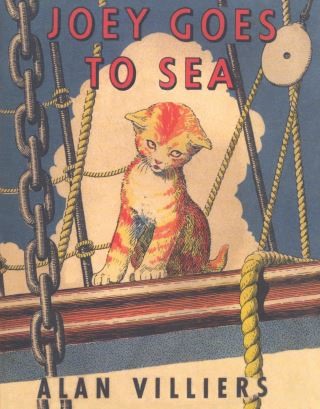 Alan Villiers was in his early thirties when he realized his dream of sailing around the world with a group of young people to show them the values to be learned as part of a sailing-ship crew. He bought a little Danish ship, sailed her from Denmark to England, and renamed her Joseph Conrad in honor of the famous sailor and author of sea fiction. With a new captain and crew, the ship sailed from England in October 1934 and arrived at New York in December before continuing on to Rio de Janeiro, Brazil, across the South Atlantic to Cape Town, South Africa, and on across the Indian Ocean and through the South Pacific before arriving back in New York in October 1936.

Villiers later settled in England and went on to a successful career as a maritime author and expert, writing forty books. In 1957 he was captain of the reproduction Pilgrim ship Mayflower II when she sailed from England to Plymouth, Massachusetts. He visited his old ship Joseph Conrad at Mystic Seaport several times before his death in 1982.

Artist Victor Dowling (1906–1963) grew up in the Bronx, New York. From an early age, he loved to write stories and draw pictures. He attended the College of the Holy Cross in Worcester, Massachusetts, and then studied at the National Academy of Design Art Schools, where he won a medal for drawing the human figure. He went on to illustrate over thirty books and many articles and stories. One of his later books, Mr. Cat (1960), written by actor George Freedly, became a national bestseller.