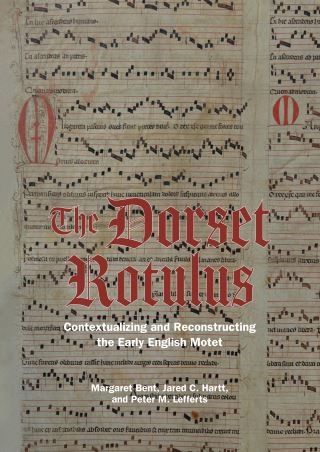 From its origins in the thirteenth century, the Latin-texted motet in England and France became the most significant and diverse polyphonic genre of the fourteenth, a body of music important both for its texts and its variety of musical structures. However, although the motet in England plays a vital role in the music-historical narrative of the first decades of the 1300s, it has too often been overlooked in modern scholarship, due largely to its preservation in numerous but almost entirely fragmentary sources.
In 2017, substantial new fragments of medieval polyphony came to light. They originated at the Benedictine monastery of Abbotsbury, a major institution located high above Chesil Beach on Dorset's Jurassic Coast. The two leaves once headed an imposing musical scroll, and preserve significant portions of four large-scale Latin-texted motets from early fourteenth-century England. Discovery of this source brings to the fore a massive seven-section motet on St Margaret, hitherto known only through highly fragmentary snippets of two of its four voices, as well as a unicum with extraordinary features addressed to the Virgin Mary and St Nicholas. When coupled with the remaining motets, one on the Ascension and the other on the Virgin Mary, the Dorset motets expand our understanding of how the English developed their own approaches to the genre, forging styles and techniques quite independently of the continental norms against which earlier scholarship has judged (and sometimes demeaned) them.
This book introduces the manuscript and its provenance in Abbotsbury, relates it to other scrolls of late medieval music, contextualizes its motets within the larger corpus of contemporary Latin-texted motets, and analyses and reconstructs each of the motets, providing complete performable transcriptions of three of these compositions as well as three of its large-scale comparands. Spurred by the Dorset discovery, this monograph, the first in thirty-five years devoted to the medieval motet in England, offers a new evaluation of the richness of the English repertory in its own terms.

Margaret Bent: MARGARET BENT is an Emeritus Fellow of All Souls College, Oxford.|||JARED C. HARTT is Associate Professor of Music Theory at the Oberlin College Conservatory of Music.|||PETER M. LEFFERTS is Professor of Music at the University of Nebraska-Lincoln.