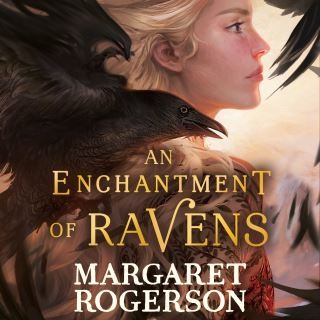 An Enchantment of Ravens

From the internationally bestselling author of Sorcery of Thorns comes a breathtaking fantasy story of danger and forbidden love. This is the perfect read for fans of Cassandra Clare, Sarah J. Maas's A COURT OF THORNS AND ROSES series, and Holly Black!

Every enchantment has a price . . .

Isobel is an artistic prodigy with a dangerous set of clients: the immortal fair folk. Yet when she receives her first royal patron – Rook, a fairy prince – she makes a terrible mistake. She paints mortal sorrow in his eyes – a weakness that could cost him his life.

Furious, Rook escorts Isabel to his kingdom to stand trial for her crime, but their journey is full of danger. Forced to depend on each other for survival, will their alliance blossom into something more?  After all, love violates the fair folks’ ruthless laws . . . but are some matters worth the risk?

Margaret Rogerson: Margaret Rogerson is the author of the New York Times bestsellers An Enchantment of Ravens, Sorcery of Thorns, and Vespertine. She has a bachelor’s degree in cultural anthropology from Miami University. When not reading or writing she enjoys sketching, gaming, making pudding, and watching more documentaries than is socially acceptable (according to some). She lives near Cincinnati, Ohio, beside a garden full of hummingbirds and roses. Visit her at MargaretRogerson.com.